Pakistan and India have exchanged fresh fire along the de facto border that divides the disputed region of Kashmir, the Pakistani military said, as tensions rise between the nuclear-armed neighbouring countries.

“Pakistani troops befittingly responded to Indian unprovoked firing” which started at 4am (23:00 GMT) and continued for four hours in Bhimber sector on the Pakistani side of the border, a Pakistani military statement said on Saturday, without mentioning any casualties.

Later on Saturday, Pawan Kotwal, a top civilian official in Jammu and Kashmir state on the Indian side, said the exchange of fire had not caused any damage.

“There was small arms fire and mortar shells fire from across the border in Akhnoor sector which lasted for around two hours (4am to 6am),” Kotwal told AFP news agency.

“No damage was caused. We are ready for any eventuality but it is peaceful in Jammu region.”

The skirmish came two days after India claimed it had carried out “surgical strikes” across the heavily militarised Line of Control, the de facto border in the disputed territory, on what it called “terrorist” targets several kilometres inside Pakistan-controlled Kashmir.

The rare public admission of such action sparked furious rhetoric from Pakistan and calls for restraint from the US and the UN.

“This is a dangerous moment for the region,” Pakistan’s Ambassador Maleeha Lodhi told AFP after meeting with UN Secretary General Ban Ki-moon at the UN headquarters in New York.

Ban on Friday offered to act as a mediator between New Delhi and Islamabad to defuse the tensions.

In a statement to AFP, India’s mission to the UN said “India has no desire to aggravate the situation”, and that “our response was a measured counter-terrorist strike”.

On Friday, authorities in parts of northern India said they had started evacuating villages within 10 kilometres of the border following the raids earlier this week.

Kashmir has been divided between India and Pakistan since the two countries gained independence from British rule in 1947. Both claim the territory in its entirety.

“We have stopped screening Indian movies at our cinemas from Friday till the situation improves and normalcy returns,” said Nadeem Mandviwalla, whose Mandviwalla Entertainment runs eight cinemas in Karachi and the capital, Islamabad.

The Indian Motion Picture Producers’ Association (IMPPA), a small filmmakers’ body, on Thursday banned their members from hiring Pakistani actors. Mandviwalla and other cinema owners said the ban in Pakistan was also in response to IMPPA’s move.

The party, which was not available for comment, has regularly called for Pakistani artists to be banned from working in India. 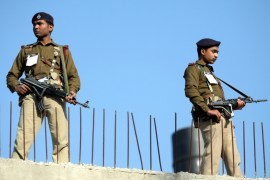