The police chief of the German city of Cologne has been dismissed amid mounting criticism of his force’s handling of New Year’s Eve sexual assaults and robberies.

The state government of North Rhine-Westphalia said on Friday it was sending Wolfgang Albers into early retirement, and the 60-year-old commander said he understood the reasons why.

Many of the crimes have been blamed on foreigners in the country, which last year accepted about 1.1 million refugees – more than any other European nation.

But none of the 31 suspects has been accused of specifically committing sexual assaults, the aspect of Cologne’s disturbances that attracted most public outrage at home and abroad.

Cologne police say they have received 170 criminal complaints connected to the New Year’s festivities, 120 of them sexual in nature.

The German government said 31 suspects were briefly detained for questioning after the New Year’s Eve trouble, among them 18 asylum seekers.

They include nine Algerians, eight Moroccans, five Iranians, four Syrians, two Germans and one person each from Iraq, Serbia and the US.

Albers had faced mounting criticism for the police response to New Year’s Eve attacks on women by groups of men within a 1,000-strong crowd described by police as predominantly Arab or North African in origin.

Reports of the harassment have fuelled calls for tighter immigration laws.

Anyone who sexually assaults women must be held accountable before the law. Women's safety is paramount.

Albers acknowledged that mistake earlier this week, but he dismissed widespread criticism that his officers reacted too slowly in response to reports of assaults and harassment of women.

However, an internal police report published in German media on Thursday characterised Cologne’s police as overwhelmed and described how women were forced to run through gauntlets of drunken men outside the station.

My heart is in #Cologne and my beloved #Germany. As someone who worked extensively on mob sexual assaults in #Tahrir I truly feel the pain.

Cologne Mayor Henriette Reker suggested on Friday that police had withheld information from her, including on the origin of suspects. She said that her “trust in the Cologne police leadership is significantly shaken”.

Earlier, Germany’s interior ministry said federal police had detained 31 men on suspicion of committing crimes including theft, assault and, in one case, verbal abuse of a sexual nature.

Police in other European nations reported other cases in public places.

In Sweden, police said at least 15 young women reported being groped by groups of men on New Year’s Eve in the city of Kalmar.

Johan Bruun, police spokesman, said two men, both asylum seekers, have been told via interpreter that they are suspected of committing sexual assaults. He said police are trying to identify other suspects.

In Finland, police said they received tip-offs on New Year’s Eve that about 1,000 predominantly Iraqi asylum seekers were intending to gather near the main railway station in Helsinki and harass passing women.

Police there said they received three complaints of harassment and detained several asylum seekers at the scene for alleged inappropriate behaviour. 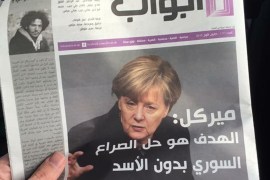 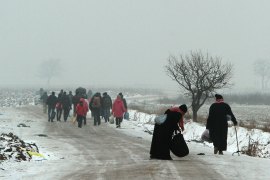 Thousands of people defy the bitter cold to continue risking the dangerous journey to Europe. 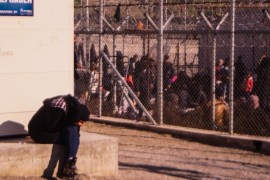 Children and women face the risk of sexual exploitation as they attempt to reach safety in Europe.