The US state of California has declared a state of emergency over a gas-well leak in the city of Los Angeles that has forced thousands of families to evacuate their homes.

Damon Nagami, from the National Resources Defense Council – an environmental advocacy group, told Al Jazeera that officials estimate that the amount of “natural gas that has been spewing into the air for the last couple of months is the equivalent to adding a half million cars to the road a year”.

Many people in the Porter Ranch area, where the well is located, say they have suffered headaches, nosebleeds, nausea and other symptoms from the escaping gas.

Experts say it could take weeks before the leak is contained. 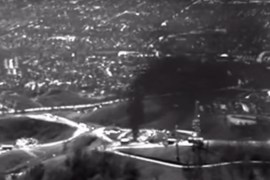 US company tries to seal leak that displaced more than 2,200 families and released nearly 74,000 tonnes of gas.