A Christian college in Chicago has begun the process of sacking a professor who wore a hijab to class in solidarity with Muslims and posted on Facebook that there are many similarities between Islam and Christianity.

Larycia Hawkins, 43, an associate professor of political science at Wheaton College, said she wore the headscarf last month to show support for American Muslims who – in the aftermath of mass shootings in San Bernardino and Paris – face increasing incidents of bias and discrimination.

Hawkins wrote on her Facebook page: “I stand in religious solidarity with Muslims because they, like me – a Christian – are people of the Book.”

She added, “And as Pope Francis stated last week, we worship the same God.”

Hawkins was placed on administrative leave in December after her statements and actions.

Speaking at a press conference on Wednesday, the professor said school officials offered her “the best case scenario” to return to teaching, which included two years of “multi-layered, ongoing conversation about the theological implication of my Facebook post and my actions in wearing a hijab”.

She added the school said it will revoke her tenure during those two years, without guaranteeing it would be restored.

“Wheaton College cannot intimidate me into cowering in fear of the ‘enemy of the month’ as defined by real-estate moguls, senators from Texas, Christians from this country, bigots, and fundamentalists of all stripes,” said Hawkins.

Wheaton College issued a statement on Tuesday confirming that Provost Santon Jones had delivered a notice of recommendation to initiate termination-for-cause proceedings to Hawkins.

“The notice is not a termination, rather it begins Wheaton College’s established process for employment actions pertaining to tenured faculty members,” Jones said.

A December 16 college statement said: “Dr Hawkins’ administrative leave resulted from theological statements that seemed inconsistent with Wheaton College’s doctrinal convictions, and is in no way related to her race, gender or commitment to wear a hijab.”

American Muslims continue to be the target of demeaning remarks from US politicians such as presidential candidates Donald Trump and Ben Carson, and by evangelical Christian leaders such as Jerry Falwell Jr, a television evangelist and president of the Virginia-based Christian college Liberty University.

On December 4, Falwell urged students to arm themselves so they can be ready to “end those Muslims before they walked in … and killed them”.

They asked fellow students “to stand in solidarity with our Muslim brothers and sisters who share our human dignity”. 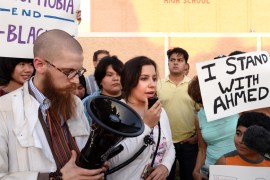 More than half of Muslim students in California say they have been discriminated against because of their faith. 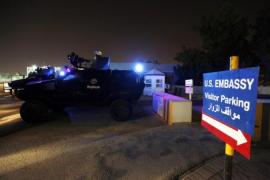 The fallacy of the phrase, ‘the Muslim world’

Western media reinforces stereotypes by reducing a complex set of causes to the rage into an amorphous mass.