Severe thunderstorms are hitting Sydney for a second day in a row, bringing disruption to the Australian city and much of New South Wales.

In advance of Saturday’s storms, the country’s Bureau of Meteorology had issued severe weather warnings of “‘very dangerous weather”, including “destructive winds, giant hailstones and heavy rain” for the south and west of the city.

This warning was confirmed by reports of a gust of 107 kilometres per hour at Sydney International Airport and another of 98km/h at Badgerys Creek.

Torrential downpours again resulted in the State Emergency Service being inundated with hundreds of calls for assistance.

There was a rainfall report of 36mm in just 15 minutes in Strathfield, a western suburb, which is sure to have caused flash flooding.

Meanwhile, in Toongabbie, to the northwest, 30mm of rain fell in 10 minutes during the late afternoon.

On Friday, the northwest of the city experienced the brunt of the storms. Some 16,000 homes were reported to be without power in the city, with another 20,000 properties suffering a similar fate across New South Wales.

The Sydney Tower was seen to be struck by lightning on several occasions.

The meteorological situation was similar on both days:

Warm, humid air at low levels has been overridden by an area of low pressure high in the atmosphere. This has encouraged the mass ascent of air above the Blue Mountains. As air rises it cools, condenses and the vast release of energy has caused huge storm clouds – cumulonimbus – to form.

The storm risk is expected to decrease overnight into Sunday. Storms could again develop during Monday before more settled weather returns later in the week. 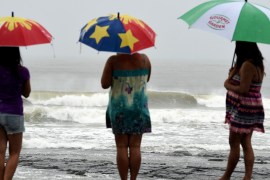 Expected to be the first named storm of the season, tropical cyclone Stan is heading towards Port Hedland. 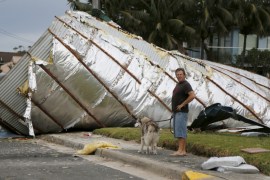