Floodwaters have continued to rise across central parts of the United States, from the Southern Plains to the Midwest.

At least 31 people have lost their lives so far in a series of violent storms that started to sweep across the region prior to Christmas.

Missouri and Illinois have been hit particularly hard by the record-breaking and relentless rains. Many river levels across the area are at an all-time high.

The rising waters stretch from Missouri and southern Illinois down to eastern Oklahoma, Arkansas and Texas. Many rivers continue to swell and that includes the Mississippi.

The mighty river is expected to crest at Thebes, in the south of the state, on Sunday at around 14m. That will be betwen 30cm to 45cm above the 1995 record high.

The flooding has been bad enough for President Barack Obama to declare a state of emergency in Missouri. This allows federal aid and enables the Federal Emergency Agency to coordinate disaster relief efforts.

Thousands of people have been evacuated from their homes for nearly two weeks. In many areas, the flooding began two or three days before Christmas, and is still ongoing.

Levees in Louisiana are being checked daily and oil production has been affected in the region. The Mississippi looks likely to reach flood stage in parts of Memphis, Tennessee by the end of the weekend.

Warnings remain in effect across much of the south. The heaviest rain is expected to drift southeastwards over Alabama and the Florida panhandle.

Monday promises to be a fine, dry, crisp and sunny day. The waters will take some time to subside, but at least residents will be able to start assessing the damage to their homes. 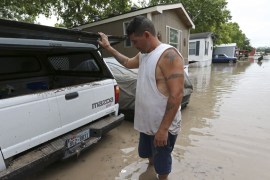 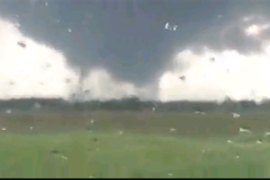 Severe storms hit the US

Tornadoes rip through the Midwest forcing residents to flee their homes