A group of Al Jazeera journalists who disappeared 10 days ago in Yemen have been freed by their kidnappers.

Reporters Without Borders calls Yemen one of the most dangerous countries in the world for journalists, with at least 17 media workers held by armed groups.

The identity of the kidnappers was still not clear, but Hamdi’s Facebook posts after his release suggested they could have been Houthi rebels.

The Houthi movement – which controls much of northern Yemen, including the capital Sanaa –  is trying to hold off government forces and troops from an Arab coalition from capturing the strategic city in central Yemen.

Taiz is the latest flashpoint in the conflict, which began in 2015 after Houthi forces swept across the country’s south, taking the port city of Aden and forcing President Abd-Rabbu Mansour Hadi to flee.

The advance prompted intervention by a coalition of Arab and Muslim states led by Saudi Arabia.

Capturing Taiz would allow pro-government forces to advance on Sanaa and further to the Houthi strongholds that straddle the border with Saudi Arabia.

The ongoing siege has led to a humanitarian crisis in the city, with hospitals running low on supplies and food scarce. 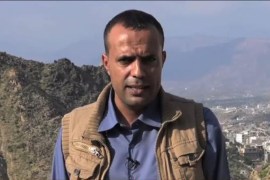 Three Al Jazeera crew members who were last seen on Monday are believed to have been kidnapped, the network says. 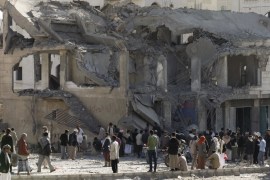 The people’s demand for regime change was met, but the country has since been torn apart by war with thousands killed. 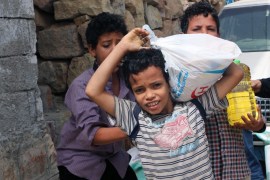