El Nino has brought hot weather to much of Bolivia.

Several regions have reported record high temperatures, with at least five major cities reporting their hottest weather in half a century.

The heat was even reported in traditionally cool mountainous regions, including the capital, La Paz.

La Paz reported a temperature of 26.5C, a long way above the average of 17C and the city’s highest temperature since 2003. Neighbouring El Alto reported 21.4C, smashing the previous record of 20.5C recorded 51 years ago.

Record temperatures were also registered in the regions of Tarija, Yacuiba and San Borja.

The hot weather is thought to be a result of the current El Nino conditions.

El Nino is the name given to the slight warming of the Pacific Ocean, which is known to affect the weather around the globe.

It’s a natural phenomenon which occurs every two to seven years, and often brings flooding to the southwest of the United States, drought in Southeast Asia and is known to inhibit the monsoon rains over India.

As El Nino increases the temperature of the ocean off the west coast of South America, it often brings extra warmth to the region.

On Wednesday, rain swept across Bolivia, causing the heat to subside. However, the current El Nino is one of the strongest on record and is not expected to ease for several months, so there could be some more hot weather in coming weeks. 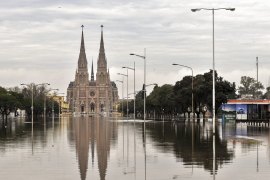 Unseasonal heavy rain has caused rivers to overflow in the province of Buenos Aires.