Renowned US academic Noam Chomsky says Bernie Sanders has the best policies of the Democratic presidential contenders, but does not have a real chance to win in a political system where elections are “mainly bought”.

In the second part of an interview with Mehdi Hasan on Al Jazeera’s UpFront current affairs show, the MIT emeritus professor said that he considered Sanders to be “basically a new dealer”.

“I agree with him in a lot of things, not in other things,” Chomsky said.

“I frankly think that in our system of mainly bought elections, he doesn’t have much of a chance.

“But if he were elected I think he would – of the current candidates –  be the one who would have, from my point of view, the best policies.”

But Sanders has recently enjoyed a major bump in New Hampshire, with a CNN/WMUR poll pointing to a huge lead over Clinton.

Still, the majority of analysts still believe Clinton to be the likely presidential nominee to emerge from the Democratic primaries.

If that were to happen, Chomsky told UpFront that he would absolutely vote for Clinton over any Republican, if he lived in a swing state.

“Oh absolutely … My vote would be against the Republican candidate,” said Chomsky, who lives in Massachusetts, a safe state for the Democrats.

Chomsky said there were clear differences between the two parties.

“There are enormous differences,” he said. “Every Republican candidate is either a climate change denier or a sceptic who says we can’t do it.

“What they are saying is, ‘Let’s destroy the world.’ Is that worth voting against? Yeah.”

The second part of Mehdi Hasan’s interview with Noam Chomsky will be aired on Al Jazeera’s UpFront on Friday, January 29 at 19:30 GMT. It will be available at the same time online at www.aljazeera.com/upfront. 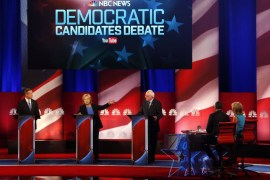 Gloves come off as Democrat candidates spar at debate 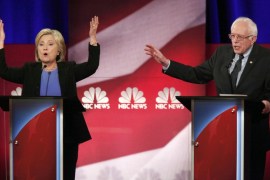 Discourse and debate between Sanders and Clinton

Democratic frontrunners vie for a lead as US presidential campaign rhetoric intensifies. 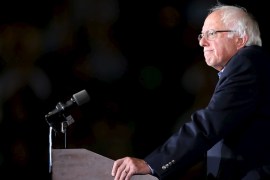