Dutch anti-immigrant politician Geert Wilders has handed out self-defence sprays to women fearful of what he described as “Islamic testosterone bombs”.

The publicity stunt, which occurred in the town of Spijkenisse near Rotterdam on Saturday, came in the wake of the New Year’s Eve sexual assaults in Cologne.

Wilders, surrounded by bodyguards and police, visited a market to hand out the sprays, which contained red paint.

Amid stalls selling vegetables, fish, flowers and bicycle parts, Wilders got a rock star welcome from dozens of supporters, while a small group of protesters chanted and waved placards, including one that read, “Refugees are welcome, racism is not”.

The Freedom Party leader said that, if elected, he would “close the borders immediately and have no more asylum seekers. We just cannot afford to have more”.

“The Dutch people in a big majority don’t want it … It makes our people and women more unsafe,” Wilders added.

The protection spray was handing out is a legal variant to pepper spray, which leaves behind a red stripe on possible assailants for a couple of days.

Leontine Maris was one of the first women to get the spray from Wilders on Saturday.

The 53-year-old said she votes for him though she disagrees with some of his more extreme comments. She said she was afraid not just of migrants, but also Dutch men.

“The whole society is going down the drain,” she said.

A small group of protesters awaited the right-wing politician, shouting slogans such as “Wilders is a racist, not a feminist”.

Ten of the female protesters were arrested for not having permission to demonstrate, Dutch media reported.

Student Kim Van de Kant, 22, was one of the women who protested against Wilders on Saturday.

“We wanted to show that Spijkenisse residents are not only Wilders supporters, even though the majority at the marketplace loves him,” Van de Kant told Al Jazeera.

According to Van de Kant, Wilders’ fans were disappointed by his short visit. “Besides that, the 70 sprays that he gave away ran out quite quickly.”

The stunt in Spijkenisse fits into Wilders’ uncompromising anti-immigrant, anti-Islam rhetoric that has propelled him to the top of Dutch opinion polls, just over a year away from parliamentary elections.

As Wilders’ popularity soars on the back of disenchantment over immigration, Prime Minister Mark Rutte’s two-party coalition is in a slump, losing ground mainly to Wilders.

Wilders’ party currently holds 12 seats in the 150-member lower house, but a poll by Ipsos on Thursday suggested the Freedom Party would win 32 seats now.

Rutte’s Liberals were second with 26 seats, down from its current tally of 40.

Other polls have Wilders even further ahead. 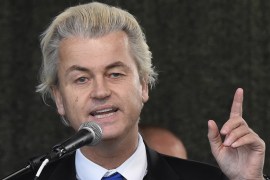