Tunisian Prime Minister Habib Essid has pleaded for “patience” following a wave of violent demonstrations against poverty and unemployment, the worst social unrest since the 2011 revolution.

Essid spoke on Saturday after chairing an emergency cabinet meeting, as authorities said a night-time nation-wide curfew would be indefinite.

Tunisia “is in danger despite the positive things which we have accomplished, particularly the transition towards democracy”, Essid said, urging people to “understand that there are difficulties”.

“Solutions exist, but some patience and optimism are needed,” Essid added.

Al Jazeera’s Hashem Ahelbarra, reporting from Tunis, said that thousands of dissatisfied people have taken to the streets in recent days, demanding immediate action against unemployment and poor economic conditions.

“They say we voted for this government because we had hopes that this government would tackle corruption, poverty and offer job opportunities for almost a million unemployed Tunisians,” he said.

“The government is saying that it does not have a quick fix and that it will take some time before it can meet the people’s demands. It is quite a delicate situation for a government that just a few years ago was promising a better future.” Ahelbarra said.

Protests over unemployment in Tunisia, which started in the western Kasserine province, intensified and spread to other parts of the country on Thursday.

On Friday, President Beji Caid Essebsi said in a televised address that the government would put a programme in place to try to ease the unemployment rate.

He also warned that members of the Islamic State of Iraq and the Levant (ISIL) group in neighbouring Libya may use the unrest in Tunisia to sneak into the country.

France will provide $1.1bn over five years to help Tunisia deal with its transition to democracy, French President Francois Hollande said on Friday.

“This is exactly why President Essebsi yesterday was stressing the fact that groups like ISIL are seizing the opportunity to try to further destabilise Tunisia,” he said.

“But the problem that you have here in the country is that people are waiting for immediate decisions to be taken by the government.”

Meanwhile, the country’s interior ministry said on Saturday that 423 people have been arrested across the country for being involved in acts of violence. 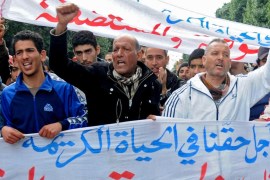 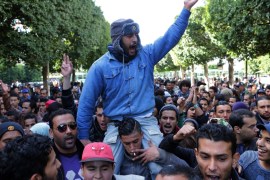 Protests over unemployment rates and the economy had intensified and spread to several cities including the capital.