Security services at Pakistani schools and universities are poor and ineffective, family members of those killed in an attack on a university in Pakistan have said.

The Bacha Khan University in the town of Charsadda in Khyber-Pakhtunkhwa, which came under attack on Wednesday, had reportedly received several warnings before the deadly raid.

A breakaway faction of the Pakistani Taliban killed at least 21 people in the attack.

“I thought I’d lost my daughter. It is a miracle that she is alive and with us,” Nazif Lala, whose daughter was at the university at the time of the attack, told Al Jazeera.

“We are worried about our children every single day when sending them to schools and universities because the security provided is extremely poor,” Lala said.

“Our politicians get the best security protocols wherever they go. Instead of spending money on that, they should focus on improving security at our educational institutes; otherwise our education system will be affected severely.

“They should be aware that only education can make us or break us as a nation,” he added.

Ashfaq Ahmed, the head of security at Bacha Khan University, told Al Jazeera that “threats were made to the university, but we were never briefed about it or prepared for it”.

“We don’t have proper weapons that can help us stop such attacks; but just think about it, if we were prepared for it, we would have handled the terrorists really well,” Ahmed said.

However, Syed Wazir, the deputy inspector general of the Mardan region, told Al Jazeera that despite
repeated threat warnings to the university, the administration did not act upon it.

“They were issued [with] several warnings to be vigilant and to take necessary measures according to protocols issued by the government. But despite that, they failed to take adequate security measures,” he said.

No end to Pakistan’s school trauma, one year on

Dr. Ala Uddin, an assistant professor of chemistry at the Bacha Khan university, who lost his friend Dr Syed Hamid Hussain in the attack, said he would continue to teach at the university as soon as it reopened, adding that he would “stay cautious as more attacks are expected”.

“The police and the university security services both are answerable for not providing us with proper security, even after receiving several threats,” Uddin said.

The head of a breakaway Taliban faction, Umar Mansoor, who claimed responsibility for this week’s attack on the university, released a video on Friday, threatening to carry out more raids on schools and universities across the country.

“Pakistan is not an Islamic state. We will continue to target schools and universities in the future,” Mansoor said in the video.

“Pakistan’s evil democratic system, its military and political leadership, use these educational institutions as their nurseries.”

Lieutenant General Asim Saleem Bajwa, a Pakistan army spokesman, said in a series of tweets that the Bacha Khan University attack was coordinated “from a location in Afghanistan through Afghan cell phones by an operative of the Taliban alliance Tehreek-e-Taliban Pakistan”.

Pakistan’s Chief of Army Staff called on Afghan leaders to cooperate against the fighters involved in the attack.

The assault on the university came a year after the Taliban attacked the Army Public School in Peshawar, killing at least 144 people, most of them children and teachers.

“Attacks on educational institutes indicate our failure. It is a big loss to our country,” Nazif Lala said.

With additional reporting by Hameedullah Khan 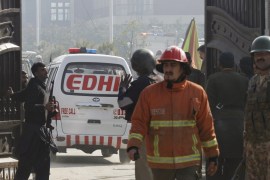