Israeli police have evacuated Israeli settlers from buildings they had raided and temporarily took over in the occupied West Bank city of Hebron, as fearful residents say they have endured intimidation and attacks.

Officers on Friday morning evicted the settlers from two homes of Palestinians in Hebron, a flashpoint city during recent unrest.

Writing on Twitter, Israeli police spokesperson Micky Rosenfeld said police removed around 80 people who had “entered illegally”, adding that there were “no injuries” and the homes were “closed off”.

When the settlers first occupied the buildings on Thursday, many of them attacked Palestinian residents and their homes, according to local media reports.

Reportedly protected by Israeli troops, the settlers broke the doors of several homes and threw rocks at Palestinian residents.

Local resident Shada Haddad, 25, said that clashes broke out between Palestinian youth and Israeli troops when the home owners were blocked by the settlers from entering their buildings.

“The settlers occupied the homes in the Old City, and then the problems broke out between Palestinians and the army,” she told Al Jazeera.

“The army was protecting the settlers like they always do,” Haddad added, recalling that soldiers fired tear gas and the crowd of Palestinians who gathered.

The police’s eviction of the settlers also sparked anger among many right-wing Israeli legislators who support the expansion of Jewish-only settlements throughout the West Bank, including East Jerusalem.

Bezalel Smotrich, a lawmaker from the ultra-nationalist Jewish Home party, was joined by Oren Hazan and Kara Ayoub, Knesset members from  ruling rightist Likud party, in announcing a boycott of coalition votes until the settlers are allowed back into the homes.

In a press release, the Jewish Home party chastised the police as “irresponsible, bullheaded and inflammatory” for evicting the settlers, as reported by the Times of Israel news site.

A focal point in the ongoing unrest, the city is divided into three spheres of control – including full Palestinian Authority administration, joint administration between Israeli military forces and PA police, and full Israeli control.

Dozens of Israeli military checkpoints severely restrict Palestinian movement into, out of and within Hebron.

Speaking to Al Jazeera, Daoud, a local resident who did not provide his last name, said that “there were tear gas canisters everywhere” after the clashes subsided on Friday.

Daoud is a resident of the Hebron’s Tel Rumeida neighbourhood, part of which was declared a closed military zone by Israeli forces in recent weeks.

Speaking of violent attacks by settlers and soldiers, Daoud said that local Palestinians “are scared to go out” due to a crackdown by Israeli forces.

“There has been a huge military presence all the time since October,” he said, referring to the outset of the ongoing escalation in Israel and the occupied Palestinian territories.

“Where there used to be one soldier, there are now six.”

Protests in other parts of the West Bank and the besieged Gaza Strip on Friday also saw at least 21 other Palestinians shot with live ammunition by Israeli soldiers.

Speaking to Al Jazeera by telephone on Friday night, an Israeli military spokesperson said only that Israeli forces used “riot dispersal means” in the West Bank and Gaza before using live ammunition.

The spokesperson said soldiers “fired at main instigators” during the protests and “hits were confirmed”.

Back in Hebron, resident Daoud said that Palestinians are “living in fear” of a domino effect when settlers move to takeover more Palestinian homes. “They are terrified of settlers moving into their house next.” 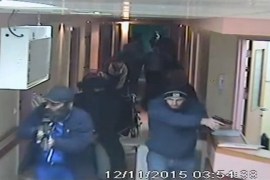 Cousin of Abdullah al-Shalaldeh, killed by Israelis in a hospital raid, was fatally shot in a separate incident.