United States-based scientists said that they have found evidence of an object they nicknamed “Planet Nine” orbiting the edge of the solar system, but some experts have their doubts.

The US team used mathematical modelling and computer simulations to “find” the object they claimed was a planet. Their research said that it was about 10 times the mass of Earth and had an odd, highly elongated orbit about 20 times further from the Sun than Neptune.

They have not yet observed the object directly but said that its existence helped explain the strange orbit of a number of distant objects in an area known as the Kuiper Belt.

They have to produce something more definitive as at the moment you would struggle to find it.

“It’s a pretty substantial chunk of our solar system that’s still out there to be found, which is pretty exciting,” Mike Brown, a professor of planetary astronomy at the California Institute of Technology, said in a statement.

But other researchers said that they were unimpressed by the evidence, which was published in the current issue of Astronomical Journal.

“I am sceptical,” Francisco Diego, senior research fellow at the department of physics and astronomy in University College London, told Al Jazeera.

“Such a large object would have been detected ages ago, since at the same distances, much smaller objects have been found, the very ones allegedly affected by this mysterious one.”

Robert Massey, deputy executive director of the Royal Astronomical Society, told Al Jazeera that “this kind of thing has been said before and then refuted”.

He added: “I think until you see an image of something, you have to maintain a degree of scepticism.”

The Caltech team said that unlike Pluto, which was downgraded from a planet to a dwarf planet in 2006 due to an inability to clear its orbit of other objects, “Planet Nine” is a real planet.

“At 5,000 times the mass of Pluto,” the statements said, “[it] is sufficiently large that there should be no debate about whether it is a true planet.”

But not all researchers agree.

“It would not be a planet as such,” Diego said. “Having a bizarre, very elliptical orbit and not having cleared its orbit from debris, as the International Astronomical Union requires from a proper planet.”

Brown and other colleagues have now started searching for Planet Nine, but only a rough orbit is known, not a precise location, making that difficult, especially as it takes between 10,000 and 20,000 years to make a full orbit around the sun.

“They have to produce something more definitive, as at the moment you would struggle to find it,” Massey said.

Even if does exist, Diego said the planet may well be difficult to see.

“It may be of a different nature from its neighbours, less bright due to a dusty and dark rather than icy and shiny surface, which would make it more difficult to detect.” 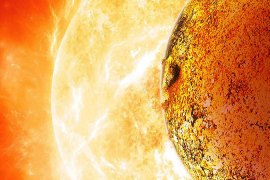 Exoplanet appears to be made of rock and iron, just like Earth, but it’s almost certainly too hot for life. 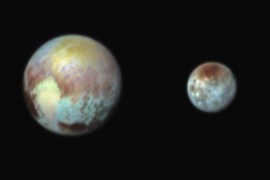 New Horizons confirms it has passed dwarf planet, capturing pictures after a near decade-long journey. 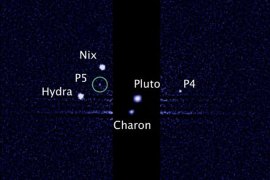 Smallest moon yet spotted around Pluto

It appeared as a faint fleck to scientists using the Hubble Space Telescope to scout out the ex-planet’s neighbourhood.