Colombia’s government and FARC rebels say they have asked the United Nations to monitor the eventual end of their five-decade conflict and the disarmament of the armed group.

“We have decided to ask the UN Security Council to create [a mission] of unarmed observers for a period of 12 months” to oversee the end of the conflict, the two sides said at peace talks in Cuba’s capital Havana on Tuesday.

They said the mission would guarantee that a ceasefire and disarmament would be genuine and permanent, calling the announcement a “transcendental” moment in the years-long peace process.

Colombian President Juan Manuel Santos said last year he would make such a request of the UN.

That the rebels agreed to make the request jointly with the government is a sign of progress as the two sides aim to reach a comprehensive peace agreement before a March 23 deadline that negotiators set last year.

Rebel leaders also travelled to Colombia last week to brief combatants in the mountains and jungles on the state of talks.

Many Colombians continue to be sceptical about the peace talks.

FARC has negotiated with the government on three previous occasions and every time it has ended in failure.

Late last year, Al Jazeera was granted rare access to a FARC camp where rebel commanders expressed guarded optimism about the outcomes of the talks in Cuba.

They said they would be wary to give up their guns unless they had guarantees that the government would protect them from paramilitary groups and organised crime.

The Latin American country’s attorney general estimates 52,000 people have disappeared during Latin America’s longest war, which has killed some 220,000 people and displaced millions. 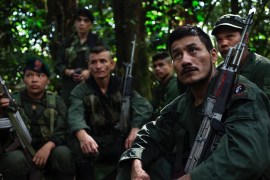 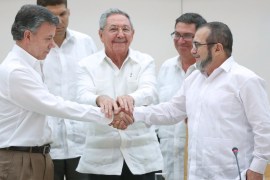 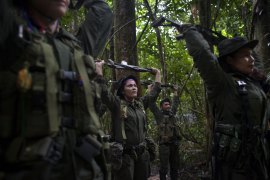