The Islamic State of Iraq and the Levant (ISIL) group has claimed responsibility for the coordinated bomb and gun attacks in the Indonesian capital, Jakarta, a news agency linked to ISIL reported on Thursday.

At least seven people, including five attackers, were killed in the explosions and gun battle between police and the attackers in the central business district of the city.

“A group of soldiers of the caliphate in Indonesia targeted a gathering from the crusader alliance that fights the Islamic State in Jakarta through planting several explosive devices that went off as four of the soldiers attacked with light weapons and explosive belts,” the group said in a statement.

ISIL’s statement said there were 15 people killed, more than double the official government figure of seven.

Tito Karnavian, the Jakarta police chief, said ISIL was “definitely” behind the attack.

Karnavian told Reuters news agency that Indonesian ISIL fighter Bahrun Naim, who is believed to be in Syria, was “planning this for a while. He is behind this attack.”

At least 20 people were injured in the security operations at the Sarinah shopping complex on Thamrin Street. Police said the attack had ended and that security forces were in control of the area.

There were conflicting reports on the number of casualties as the police battled the fighters.

Earlier, tweets from the account of Jeremy Douglas, regional representative of the UN office on Drugs and Crime for Southeast Asia and the Pacific, described a bomb and “serious” exchanges of gunfire on the street outside his office.

Al Jazeera’s Step Vaessen, reporting from Jakarta, said a police post was destroyed in a grenade blast and that sporadic gunfire was heard in the downtown area of the capital.

“Six gunmen on motorbikes entered the downtown area carrying long rifles, shooting into the crowd, with some carrying explosives,” Vaessen said. “One of the gunman shot a police officer from close range.”

“Witnesses told Al Jazeera that they found nails on the streets near the affected area, indicating that the fragments came from the explosives used in the attacks,” Vaessen said.

The attacks caused panic and prompted a security lockdown and enhanced checks in several areas in the city of 10 million.

“The police are still investigating, so we don’t know how and why the attack happened. There were at least six explosions, and so far it looks like the police was the target,” our correspondent said.

Indonesian President Joko “Jokowi” Widodo, who was on a working visit in the West Java town of Cirebon, condemned the brazen attacks.

“This act is clearly aimed at disturbing public order and spreading terror among people,” Jokowi said in statement on television.

Indonesia, the world’s most populous Muslim nation, has been a victim of several bombing attacks in the past, claimed by Islamic groups.

Thursday’s attacks, however, were the first major incidents in Indonesia’s capital since the 2009 bombings of two hotels that killed seven people and injured more than 50. 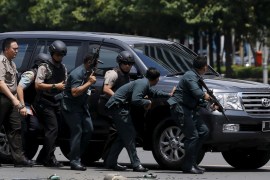 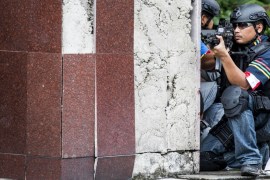