Since records started in earnest, ocean surface waters haven’t been this warm. An ocean surface around 26 degrees Celsius is one of the major factors in creating warm-cored cyclones. That warm heart is a requirement for a cyclone if it is ever to build into a hurricane or a typhoon.

Such ocean warmth is normal in equatorial waters, but the northern winter does tend to lessen the surface area that exists above 26C, and tropical cyclones don’t form. The contribution from global warming has now put enough heat into the Atlantic, around the Bahamas and eastwards, to keep a storm circulation going.

On its own, Hurricane Pali in the central Pacific is a unique event. Sub-tropical storm Alex, in the Atlantic, is merely rare. Alex is only the fourth known named storm in January, since reliable records began, in 1851. Pali and Alex in existence together at the same time, so early in the year, make an unprecedented event.

You would not normally expect to see such cyclones until July. Global warming has made Alex’s formation much more likely to occur, and with the addition of a major El Nino event, the same can be said for the Pali.

The probability of these storms forming simultaneously, in January, two or three decades ago, was virtually nil. It now looks measurable, and with oceans continuing to warm may well eventually become the norm. 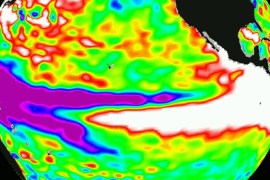 The earliest forming Central Pacific hurricane this year could be the first to cross the equator this season.