At least 45 of 81 whales have died after stranding on a beach in the Indian southern state of Tamil Nadu.

The short-finned pilot whales washed ashore on the beach of Tiruchendur, a small port city in Tamil Nadu’s Thoothukudi district on Tuesday.

Deepak Bilgi, wildlife warden of the Gulf of Munnar Marine National Park, in charge of the stranded whales, said that the remaining whales were pushed back to the sea with a few returning back.

“The older ones that succumbed to injures returned but the younger ones responded well,” Bilgi said.

“Scientists investigating say it is disorientation. However we have sent one of the whales for autopsy”.

M Ravi Kumar, the top official of the Thoothukudi  district, also inspected the beach where the whales were stranded.

“This is the first time since 1973, when 120 whales were stranded, that such an incident has happened here,” Kumar told DPA news agency.

Kumar said that officials had rescued and taken at least 36 of the mammals back to sea, with some finding their way back to the beach.

“Fishermen and officials dragged many whales into the sea, but several returned to the shore,” Kumar said.

Of the 45 whales that died, 37 were adults and eight were sub adults, The Hindu newspaper reported.

These whales are deep water mammals that can dive to depths up to one kilometre.

The newspaper said that the whales could have been stranded while in search of food, squids being their favourite choice.

Very little is known about this particular group of whales that the International Union for Conservation of Nature’s Red List of Threatened Species classifies as “data deficient”, the paper reported. 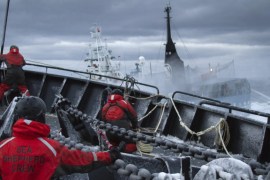 Sea Shepherd calls on Australia to intervene after Japan’s snub of a court ruling banning its ‘scientific’ whaling. 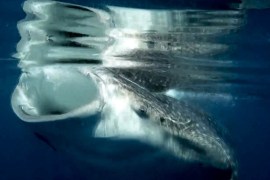 Scientists are perplexed by the world’s largest gathering of whale sharks in the middle of the Gulf.