A series of bombing attacks and shootings across Iraq have left scores dead and dozens more wounded, security officials say.

At least 32 people were killed and 58 injured in an attack on the al-Jawhara shopping centre in the capital, Baghdad, on Monday, according to police sources.

The assailants charged into the mall after a car bomb exploded outside the building, located in the predominantly Shia neighbourhood of New Baghdad.

Police regained control of the mall and officials said that all attackers had been killed.

A senior security official told state television that there were no hostages, rejecting reports that there had been people held.

The Islamic State of Iraq and the Levant (ISIL) group claimed responsibility for the attack, as well as for a later attack in Diyala province.

Seven others were killed in a separate bombing in Baghdad, which has not been claimed by any group so far.

In the town of Muqdadiya in Diyala province, 80km northeast of Baghdad, a twin suicide bombing killed another 42 people at a cafe.

The second bomb went off as medics and civilians gathered at the site of the first blast.

Monday’s attacks exacted the biggest death toll in the country in three months. 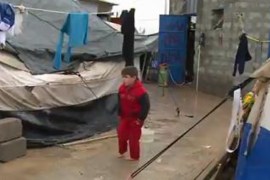 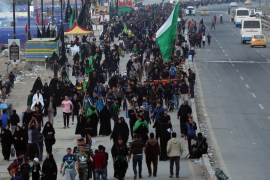 At least 15 dead and 38 others injured after bombings strike routes used by pilgrims travelling to Karbala.