Aid agencies say a deal has been reached to send food and medicine into beseiged towns in Syria, where tens of thousands of people are in danger of starving to death.

The aid deal agreed on Saturday will result in humanitarian supplies being sent to the opposition-held town of Madaya at the Lebanese border, and to two villages in the northwestern province of Idlib that are blockaded by rebels.

Aid agencies have warned of widespread starvation in Madaya, where some 40,000 people are at risk.

The UN said on Thursday that Damascus had agreed to allow access to all three areas, but did not say when the delivery would take place.

“Both date and time have been set. Aid will go to three towns on Monday morning, all at the same time,” said a source familiar with the matter. A second, pro-Syrian government source confirmed the details.

Images of emaciated bodies and hungry children have led to an international outcry over the use of siege tactics by all sides in the war.

News of the agreement came on Saturday as scores of people were killed and more than 100 others injured in Russian air strikes in Syria’s Idlib province.

The volunteer-run Syria Civil Defence told Al Jazeera that Saturday’s Russian air strikes targeted the town of Maarat al-Numaan, 290km north of the capital, killing at least 43 people and injuring at least 150 others.

“Our volunteers are still in the area that was targeted by the air strikes. They are still trying to help those injured and affected by the attack,” the coordinator for the Idlib Syria Civil Defence told Al Jazeera.

“Many of those injured are in very serious conditions, the death toll is expected to rise,” he added.

In another attack in Idlib province, the Syria Civil Defence said at least three people were killed and four others were injured in air strikes that targeted a school and a fire department in Ariha.

Known also as the White Helmets, the Syria Civil Defence is a group of volunteer rescuers formed in 2013 that now numbers more than 2,700 volunteers.

The UK-based Syrian Observatory for Human Rights put the death toll at 39, adding that the air strikes targeted a court and a prison in Maarat al-Numaan.

Anas Maarawi, a media activist in Idlib, told Al Jazeera that the attacks targeted a court and a prison controlled by al-Nusra Front in Maarat al-Numaan.

“The first floor of the court was targeted in addition to a prison. We are getting reports that at least 53 have been killed in these air strikes,” Maarawi said.

In another development, Syrian Foreign Minister Walid al–Muallem told the UN special envoy for Syria, Staffan de Mistura, on Saturday that Syrian regime was ready to attend the talks in Geneva expected on January 25.

SANA, Syria’s state news agency, said that Muallem stressed the necessity of having a list of the opposition groups who are going to attend the talks.

Muallem said that efforts for a political solution and the UN Security Council’s latest, relevant resolutions are linked to the credibility of the efforts of fighting terrorism, including forcing the countries which support terrorism to stop backing it, SANA reported on its website.

The conflict in Syria, which has killed over 250,000 people according to the UN, will mark its fifth year in March.

The Syrian Observatory said last week that more than 55,000 people, including almost 30,000 civilians, have been killed in Syria during the year 2015 alone. 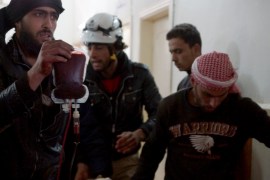 Syrians say world has forgotten them as winter sets in

Around 400,000 cut off from food and medical supplies, prompting many to question where help will come from. 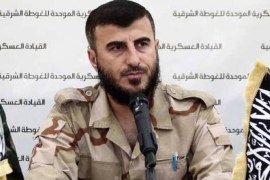