Police in North Carolina have released video footage of the fatal shooting of Keith Scott, the 43-year-old father of seven whose killing sparked days of protests in the North Carolina city and reignited rage over the use of lethal force against black men.

A dashboard camera from a police car shows Scott, killed on Tuesday, exiting his car and backing away from it. Police shout to him to drop the gun, but it is not clear that he has anything in his hand. Then shots break out and Scott drops to the ground.

A second body camera video from an officer does not show the moment of the shooting. It shows Scott outside his vehicle before he is shot, but it is not clear whether he has something in his hand. Then the officer moves and Scott is out of view until he is seen on the ground.

Here's the video from @CMPD #KeithScotthttps://t.co/Km0Ox80eXE

“The footage itself will not create in anyone’s mind absolute certainty as to what this case represents and what the outcome should be,” said Putney, who described the videos as supporting other evidence, rather than being standalone proof.

Police said the videos were released for the sake of transparency, and initially live tweeted details about the footage. But suddenly, the tweets were deleted from the police department’s account – followed later by an announcement from the same account that “an employee, uncomfortable with decision to live tweet, deleted all of @cmpd’s tweets. That should not have happened. Retweeting them now.”

After watching the released footage, Joe Cox, a military veteran in Charlotte, described the police’s behaviour as “really aggressive”.

He said the video had not convinced him to believe the police account of events.

Nearly a week of protests over the killing showed no signs of abating on Sunday.

Hundreds marched through the centre of Charlotte on a fifth night of demonstrations that stretched into Sunday morning, including white and black families protesting police violence.

One sign read: “Stop police brutality”, and another showed a picture of a bloody handprint with the phrase #AMINEXT, a social media tag about the fear of becoming a victim of police.

For the first time in three nights, police enforced a curfew, saying they would arrest violators. A crowd gathered outside police headquarters dispersed without any violence shortly after midnight.

On Friday, Scott’s wife Rakeyia released her own dramatic video of the fatal shooting to the US media, and called on the police to release their video recordings of the incident.

In Rakeyia Scott’s two-minute video, the actual moment her husband was shot was not shown, but she can be heard pleading with the armed officers not to shoot her husband and telling them her husband is unarmed.

There was no visible weapon near Scott’s body in the video, which was filmed a few metres from the scene.

Police had previously said a black officer – named as Brentley Vinson – fired the fatal shots at Scott after he ignored repeated warnings to drop a gun.

However, neighbours said he was holding only a book. Police said a gun was found next to his body.

Vinson, a two-year member of the Charlotte-Mecklenburg police department, has been placed on leave, standard procedure in such cases.

Scott’s death extends a long line of black victims killed by police, and protesters have dismissed the police account that Scott was holding a gun when he was killed.

Many continued their protest for a fourth night on Friday into the early hours of Saturday, defying a recently imposed curfew from midnight to 6am.

Scott was the 214th black person killed by US police so far this year of 821, according to Mapping Police Violence.

There is no national-level government data on police shootings.

North Carolina Governor Pat McCrory, a Republican, signed a law last week that would require authorities to obtain a court order before releasing police video. Critics said the law would prevent the transparency needed to quell public anger in the wake of police shootings.

Charlotte is the latest US city to be shaken over police killings of black men by police, a list that includes Baltimore, Milwaukee, Chicago, New York, Ferguson and Missouri.

In Tulsa, Oklahoma, on Thursday, prosecutors charged a white police officer with manslaughter for killing an unarmed black man on a city street last week. 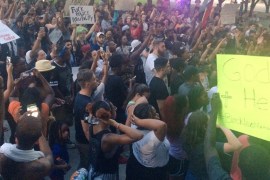