In an interview with Mehdi Hasan on Al Jazeera’s flagship current affairs show Upfront, de Mistura spoke about the escalation of violence in Syria and the ongoing attempts to secure a sustainable ceasefire.

“As far as I’m concerned, this is considered the worst humanitarian tragedy since the Second World War,”

In his “46 years” and “19 wars” with the UN, including Iraq, Afghanistan and the Balkans, de Mistura added, “I’ve never seen so many players with so many different agendas, like in this conflict.”

It’s been more than five years since the civil war erupted in Syria, and after multiple attempts to resolve the conflict – there is still no end in sight to the fighting.

The flashpoint city of Aleppo, which is a bastion for rebels in the country’s north, has been pummelled by Syrian government jets over the past 24 hours – a development described by de Mistura as a “return to open conflict”.

Speaking from New York a day after what he called “disappointing” talks between Russia and the US, de Mistura argued that “the Russians in my mind were genuine in my opinion when they negotiated with the Americans on this”.

He continued: “I don’t think Russia, and I want to believe that, has any interest in inheriting a broken country which is basically the concept: you break it, you own it.”

UPFRONT: What will it take to end Syria’s war?

According to the UN special envoy, “I think [the Russians] are genuine in their concerns about terrorist organisations.”

The Italian-Swedish diplomat also spoke about Jabhat Fateh al-Sham, the group formerly known as al-Nusra Front that changed its name after cutting ties with al-Qaeda in July.

“Everybody recognises … [Nusra] is al-Qaeda, regardless of whether they changed the name,” de Mistura said.

Pressed on recent reports in The Guardian newspaper that the United Nations has been too close to the family of Syrian President Bashar al-Assad and to supporters of the Syrian regime, de Mistura passionately defended the UN.

“Look at this hand, can you see it? I’ve been shaking the hands of many, many unpleasant people in my life,” he said.

“That means sometimes accepting what we don’t like to accept, dealing with those who are actually stopping the aid and being able to deliver it anyway.

“When we are in Damascus, we have to deal with those in Damascus.” he continued. “When the convoy comes across the line you think that our colleagues are not dealing with insurgents?” 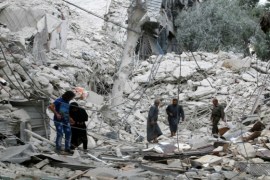