A New Jersey mayor has said one of five suspect devices found in a backpack near a train station exploded while a bomb squad robot was trying to disarm it.

Christian Bollwage, the mayor of Elizabeth, New Jersey, said that the device exploded shortly after 12:30am local time on Monday. The FBI was leading the investigation and working to disarm the other four devices.

There were no reports of injuries. Bollwage said to expect more detonations.

Two men called police and reported seeing wires and a pipe coming out of a package after finding it around 8:30 pm on Sunday, the mayor said.

Al Jazeera’s Tom Ackerman, reporting from one of the stalled trains in nearby Metuchen, New Jersey said authorities had “suspended all services on trains south and west of New York City because of reports of a possible live bomb had been found in a trash can at the Elizabeth station”.

Bollwage said two men called police and reported seeing wires and a pipe coming out of a package after finding it at about 9:30 pm on Sunday.

He said the Union County bomb squad’s robotic device indicated that the package the men left near the train trestle could be a live bomb, adding that the FBI and state police would decide how to remove the device.

The discovery of the suspicious package comes a day after an explosion in Manhattan injured 29 people, and an unexploded pressure-cooker device was found four blocks away.

“The thought, of course, is that they are all related,” said Ackerman.

Ackerman said that a “widespread search” was under way across the New York Metropolitan area to “see who is behind this spat of bombings, and of course, the suspicion would appear, that there are more to come in locations that we have yet to find”. 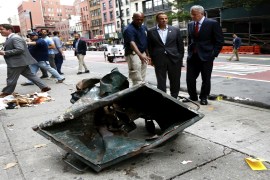 Governor says authorities have not found ties between explosion in Manhattan that injured 29 people and ISIL. 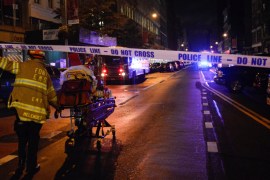