With the US election less than two months away, recent attempts to hack election data systems have prompted some officials to say that Russia could be trying to manipulate the race.

But is such a thing likely? Or are the claims just propaganda?

The cyber attacks on voter registration systems in Arizona and Illinois late last month were blamed by some anonymous officials on Russia, and followed a high-profile hack of Democratic Party computers that resulted in a cache of emails being released by WikiLeaks.

While the voter registration hack resulted in the theft of only a single username and password, the FBI is investigating.

“We will not ignore attempts to interfere with our democratic processes,” Carter said. Asked later to elaborate, Carter said he was referring to Russia’s “interference in the internal affairs of nations, short of war”.

Russia has denied it sponsors or encourages any hacking activity.

President Barack Obama’s homeland security adviser said on Wednesday that it would be very hard to hack into America’s voting systems in a way that could alter an election outcome.

Lisa Monaco said election systems were not connected to the internet and were diffusely operated by state and local governments.

The bigger worry, she said, involved efforts to sow “concern or confusion” about the resilience of the system.

Monaco’s remarks echoed those of FBI Director James Comey, who told an audience last week that “the vote counting in this country tends to be kind of clunky,” which makes it harder for hackers to infiltrate.

Earlier this year, Republican party presidential candidate Donald Trump dismissed suggestions that Russia had sought to influence the US election by engineering the theft of the Democratic Party emails.

Representatives from Clinton’s campaign claimed Russians hacked computers belonging to the party, and had released the emails on the eve of the party’s convention. They also pointed out that Trump had, in the past, expressed admiration for Russian President Vladimir Putin.

Trump has downplayed his relationship with Putin, but says he wants to improve relations with Moscow.

Shyla Nelson, a cofounder of the civil rights group Election Justice USA, told Al Jazeera: “The narrative that somehow ‘foreign operatives’ would be doing so [hacking] in order to interfere with our national elections is not only unsubstantiated, it’s reckless and incendiary.” 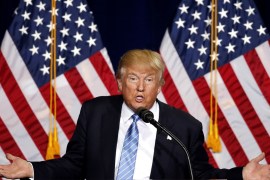 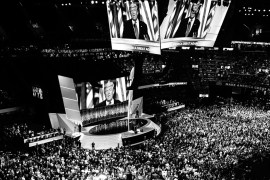