It would be wrong to say that the people of Taiwan have been lucky. The island has just borne the brunt of the most powerful storm since 2013’s Typhoon Haiyan.

Super Typhoon Meranti was the tenth most powerful cyclone, hurricane or typhoon ever recorded globally.

It was the equivalent of a Category 5 hurricane [as measured on the five-point Saffir-Simpson scale]. At one point sustained winds within Meranti reached an astonishing 305kph.

Yet, the topography of the island saved the inhabitants from what could have been a far worse experience. The populated southeastern side of the island was afforded some shelter by the Hengchun Peninsula of Pingtung County.

Maximum winds at Kaohsiung International Airport were “only” 114kph.

The island was not so fortunate in terms of rainfall, which in the coming days will lead to a heightened risk of landslides. Up to 500mm of rain fell in parts of the south, and over the mountains there were reports of 800mm of rain.

Undersea topography also came to Taiwan’s aid. The island shelves very steeply into the Pacific Ocean, and that minimised the possible effects of what is often the deadliest element of a powerful cyclone – the storm surge.

A storm surge is an abnormal rise in water, above the predicted astronomical tides.

It is caused by a dome of water being pushed up by the sustained strength of the wind. There is also a contribution from the low central pressure of the cyclone, but it is very small.

This dome of water has a vertical circulation as it moves through the ocean. Once the dome approaches shallower water, the circulation is disrupted and the downward movement of the water is cut off. It only has one way to go, and that is up.

Typhoon Haiyan in 2013 produced a surge of up to eight metres, with waves of five metres on top of that. Taiwan’s south coast is likely to have been battered by huge waves, but, thanks to the lack of shallow water, no storm surge has been reported.

Because Meranti passed to the south of Taiwan there were concerns about the possible impact of a storm surge along China’s Guangdong and Fujian coastline. Predictions of a storm surge in excess of two metres were made by the Joint Research Commission of the European Union.

Early reports suggest Meranti hit the mainland as a Category 2 equivalent storm with sustained winds of 165km/h. The much shallower coastline here and the ferocious winds would certainly support such a surge.

Yet it would appear that Xiamen, the island just north of Meranti’s point of landfall, suffered relatively little coastal inundation from a surge or waves. This is one of the 20 busiest ports for container shipping.

It seems likely that landfall, at 18:00 GMT on Wednesday, was within two hours of low tide, minimizing the impact of enhanced sea levels and wave action.

Nevertheless, more than 1.6 million homes in southeastern China have been left without power and although Meranti has been downgraded to a tropical storm, it has the potential to cause further problems across the region largely due to flooding from rainfall.

In the next few days another typhoon will be approaching Taiwan, but at this stage Typhoon Malakas is expected to pass to the east of northern Taiwan. 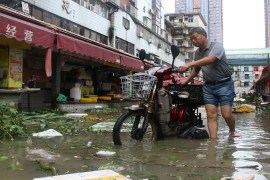 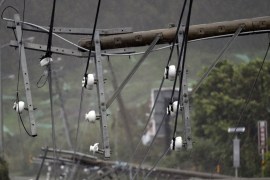 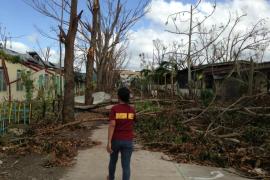