Clashes have erupted between residents of a village in southern China – once dubbed a symbol of grassroots democracy – and riot police who fired rubber bullets and used tear gas against crowds of stone throwers.

The violence broke out after 13 people were rounded up in pre-dawn raids on Tuesday in the fishing village of Wukan in southern Guangdong province.

The raids and arrests came less than a week after a democratically elected local leader, Lin Zulian, was jailed by authorities on corruption charges. Locals in Wukan, a village of 13,000 people, took to the streets in June to protest against Lin’s arrest and what they claim was his forced confession.

“The riot police started attacking and shooting at us,” one Wukan resident told Reuters news agency by telephone on Tuesday.

“They are still fighting now. We want them to leave,” he said.

Video and photos shared on Chinese social media, including a clip posted to the website of the South China Morning Post newspaper, showed clashes in what was said to be the streets of Wukan, including footage of Chinese police with riot shields and helmets retreating under a hail of bricks and stones.

Other images showed bloodied civilians and people in the streets wearing crash helmets and holding Chinese national flags and rocks.

Lufeng county police, who oversee Wukan, stated in a micro-blog post on Tuesday that 13 people were arrested for organising illegal assemblies and using threats to force villagers to protest.

The police also issued a stern warning to people using social media, accusing them of spreading false rumours on “the so-called Wukan issue”, adding that China’s cyber police were investigating the posts.

Wukan residents received international attention after their 2011 uprising led authorities to grant direct village-wide elections, and which saw the now jailed Lin, a protest leader at the time, elected as their village chief in 2012.

Allowing the villagers to choose their own leaders was seen as an attempt by the government to curb months of uncompromising protest by the residents against illegal land grabs by local officials and abuses of power.

When one of the protest leaders, Xue Jinbo, died in police custody, villagers barricaded roads leading into Wukan and faced off with security forces for more than a week, catching international media attention.

Against all odds, Chinese authorities backed down and promised rare concessions to Wukan’s residents, including pledges to investigate their land disputes and allow direct village-wide elections to be held.

The prosecution of Lin has once again outraged among many in Wukan, and Hong Kong-based human rights activists believe Tuesday’s police operation could represent a push to silence potential protests in the area.

“The government wants to use this crackdown to set an example and warn other neighbouring villages not to stage protests,” Patrick Poon, Amnesty International’s Hong Kong-based China researcher, told Reuters.

The election was the first major polls since the 2014 “Umbrella Movement” protests in Hong Kong against Chinese goverment restrictions on political freedom. 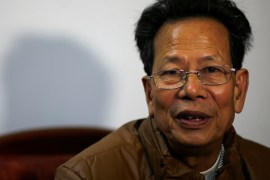