Al-Eizariya, occupied West Bank – This summer, 18-year-old Yara al-Sharabati was allowed to be in the same room as her father, who is serving a life sentence in an Israeli prison, for the first time in 12 years. She was finally allowed to hug him.

Ayman al-Sharabati – affiliated with the al-Aqsa Martyrs Brigades, Fatah’s armed wing – was arrested in 1998 for carrying out an attack in Jerusalem that killed one Israeli and wounded another.

According to prisoners’ support group Addameer, Palestinian prisoners accused by Israel of committing security offences routinely face severe restrictions on family visits, as well as isolation, and are tried in military courts. To cross from the West Bank into Israeli territory, prisoners’ families have to apply for permits from the Israeli Civil Administration, a process facilitated by the Red Cross. The organisation’s decision to cut back its family visits programme caused an uproar last month.

Currently, 7,000 Palestinians are being held in Israeli prisons, 458 of whom are serving life sentences. Seven hundred are administrative detainees, held without charge or trial.

Yara al-Sharabati told Al Jazeera about the events of July 10, the day she met her father.

“When I walked through the door, I felt free that I could hug him. I suddenly felt like I wanted to run. So I ran to him, and he held me and hugged me. We held each other for about four minutes.

At first, my father had to argue with the guards that it wasn’t a regular visit, but a private one. That’s why our time was cut.

Then there came two security guards, a male and a female one, who separated us. The female guard took me away, and the male guard took my father. They said, “Now it’s time to take your picture together.” Then the guards came and took our photo together, with their camera, and said the meeting was over.

We had one minute left till the end of the meeting, but they only allowed us four minutes together.

I didn’t get the picture immediately. I got it after one month, when people who visited my father asked for it from the prison administration. That’s why I could only publish it on Facebook a month later.

WATCH: Beyond the Walls

Four years ago, my father submitted a request to the Israel Prison Service for a private visit with me. He first submitted it when he was at Nafha prison, and it was rejected. He submitted it again in Hadarim, and it was denied. In Beer Saba prison it was also rejected, until he was moved to Gilboa prison. Only then did they accept this request.

I hadn’t seen him in three years, because I stopped getting permits. I don’t even know now when I will be given another permit to see him. I don’t know the reason; they say there is a security ban.

I remember when we were children; on the day of the visit, we would normally wake up at 5am. So it was even difficult for my mother to wake us up. We were four children, all of us young.

Even though it was tiring and we were giving my mother a lot of trouble, the moment we looked through the glass and started talking to our father, suddenly we forgot all the fatigue, all the pain.

We would go from our home in Eizariya [in the suburbs of Jerusalem] to Bethlehem, and then from the Bethlehem checkpoint to Jerusalem, and from there to the prison where he was being held.

Even though it was tiring and we were giving my mother a lot of trouble, the moment we looked through the glass and started talking to our father, suddenly we forgot all the fatigue, all the pain. It usually took from 5am to 11pm. We had to change buses, in addition to the inspection at the checkpoint.

We would talk to him through a glass, but the glass was very thick. So he’d start talking to us through a phone, but the voice wasn’t even that clear. I felt like they were intentionally blurring the voice. The phone calls were not that good, not that clear.

My father wrote poetry and short stories when he was in jail, so he asked me to read them and give him feedback. He encouraged me to write, to read and to study. He told me studying is the most important thing and the key. I’m in my first year at university now, studying medical imaging. This is the way I will help my nation and homeland.

I remember once, my mother went to Ashkelon prison to visit him. I remember she returned home deflated, and when we children asked her what was going on, she didn’t immediately answer. We realised it was because she hadn’t been able to see him, as he’d been transferred to another prison.

The Red Cross decision to cut family visits to prisoners won’t affect us. We don’t get permits anyway. Only my aunt, my father’s sister, can go. She’s over 55, so she can go there without a permit. His mother-in-law, who regards him as her son, hasn’t visited him in 19 years. Only direct relatives are allowed to visit.

Alaa, my eldest brother, is allowed to see him once a year, and has come twice from France, where he’s studying, specifically to see him. People with West Bank IDs have to approach the Israeli Civil Administration and get the permit through them. But if the prisoner is punished, then they would withhold this permit from anyone from his family, male or female.

It obviously wasn’t easy for me, growing up without my father. I always felt different from other schoolchildren my age who’d have their father around to take them to places.

Before I go to bed every night, I feel he’s not around. I start looking at the picture we took together when I was six, and now this new picture, to remember. It puts an extra coat of responsibility on me, because I feel I always need to work harder to succeed in order to lift his spirits, to make him proud.

The yearning increased as I grew up. Children, when they’re too young, they don’t understand.

But I feel I know him because my mother always talked to us about him – about how he sacrificed his life for his homeland. And other people who knew him as well, would always emphasise the fact that he was very respectful, a very neat and good man. People always tell me about him.

The day I met him was his 48th birthday. He was imprisoned when he was 29.

It was just a day before they were going to publish the grades for our matriculation. He told me not to be worried, that everything would be all right. A day after this visit, the scores were out. I passed.” 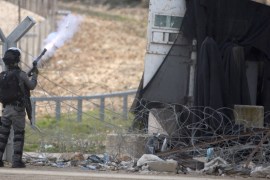 Majd Rimawi is among more than two dozen Palestinian children born to a prisoner family through sperm smuggling and IVF. 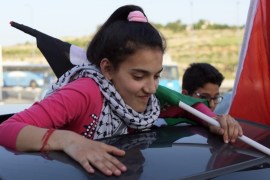