At least 10 Yemeni soldiers have been killed in a suicide bombing attack in the southern province of Abyan, security officials said.

The attack comes nearly a month after government forces, backed by an allied Arab coalition, dislodged al-Qaeda fighters from Zinjibar, the capital city of Abyan.

Troops retook other towns across Abyan but have been met by fierce resistance in a key al-Qaeda stronghold, Al-Mahfid, a town which lies further east.

Fighters from al-Qaeda and the Islamic State of Iraq and the Levant (ISIL) armed group have escalated their attacks in the country’s south in recent months.

Al-Qaeda has expanded its influence in southern Yemen, taking advantage of a power vacuum that has pitted Yemen’s Houthi rebels against the government of President Abd-Rabbu Mansour Hadi.

Both the United States, and an Arab military coalition, who back Hadi’s government, have also turned their sights on al-Qaeda, targeting it with air strikes.

Yemen has been torn apart by conflict since 2014, when Houthi rebels, allied with ousted President Ali Abdullah Saleh loyalists, captured large swaths of the country, including the capital Sanaa.

Since then, the United Nations estimates that approximately 10,000 people have been killed and 2.8 million driven from their homes in fighting across the country. 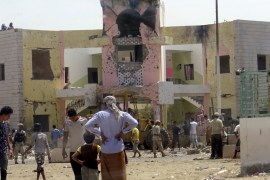 Gathering of new recruits at army training camp in northern part of Aden was targeted in suicide car bombing. 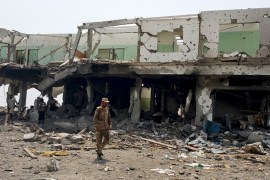 Shelling from Yemeni side kills four troops and wounds eight others in Saudi border town of Aseer.