Nearly two million Muslims have gathered in the vast Saudi plain of Mount Arafat for the most important ritual of the Hajj, an annual pilgrimage that re-enacts the actions of the Prophet Muhammad from more than 1,400 years ago.

Worshippers from more than 150 countries converged at the 70-metre hill at sunrise on Sunday, some 15km from Mecca, for “wukuf”, a high point of the Hajj which all pilgrims must attend in the mid-afternoon.

Wearing two white, unstitched pieces of cloth for men known as the “ihram”, and any loose-fitting clothing for women, the pilgrims climbed steps built into the hill where the Prophet Muhammad gave his final sermon.

In what looked like an unbroken sea of white, the pilgrims marched to the top, reciting prayers and supplications.

Al Jazeera’s Jamal Elshayyal, reporting from Mecca, said there was an extremely sombre mood at the plain, with many spending their time in prayer and introspection.

“Many of the people we have spoken to have been reflecting on the Prophet’s final sermon and how poignant it is today. A message that was about the sanctity of life, forbidding oppression and calling for greater love and unity.”

At sunset on Sunday, the pilgrims will head to Muzdalifah, about 9km away. There they will spend the night under the open sky until just before sunrise and begin collecting pebbles for the next day’s rites.

On Monday, as Muslims around the world celebrate Eid al-Adha (Feast of the Sacrifice), pilgrims performing the Hajj will cast pebbles at a pillar on the Jamaraat Bridge in Mina, in a symbolic renunciation of the devil.

This stoning ritual goes on for two days before Hajj draws to a close.

As part of its intensified crowd control measures, nearly a thousand new surveillance cameras have been installed at Mecca’s Grand Mosque, and the Jamarat stoning will be more tightly controlled than in previous years.

Saudi authorities had appealed to pilgrims to perform the ritual at any part of the day, rather than only in the afternoon.

Also for the first time, pilgrims will be given electronic bracelets storing personal and medical information that will help authorities to provide care and identify people.

The Hajj is one of the world’s biggest displays of mass religious devotion and is expected to be attended by more than 1.5 million pilgrims.

This year, though, Iranian pilgrims are notably absent after Tehran and Riyadh failed to reach a deal on arrangements for Iranian citizens.

Last year’s Hajj was marred by a stampede that killed 769 pilgrims – the highest Hajj death toll since a crush in 1990. The disaster deepened tensions between the countries as many of the pilgrims killed were Iranian.

In a separate development, the kingdom said it was launching a 24-hour Farsi-language channel that would broadcast this year’s Hajj.

“The channel aims to broadcast the message of the Hajj, the eternal meanings of Islam and to show what is being provided by the kingdom,” the Saudi Press Agency quoted Adel al-Toraifi, the minister of information and culture, as saying.

Pilgrimage to Mecca is one of the five pillars of Islam and undertaking it is considered an obligation for Muslims at least once during their lives, if they can afford to do so. 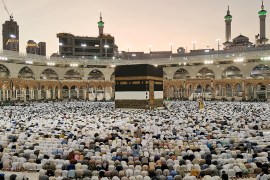