Saudi Arabia’s grand mufti has said Tehran’s leaders are “not Muslims”, a day after Iran’s supreme leader Ayatollah Ali Khamenei accused Saudi authorities of being responsible for the deaths of Muslims during last year’s deadly crush at the Hajj pilgrimage.

The rhetoric from the regional rivals – mostly Sunni Saudi Arabia and majority-Shia Iran – comes as preparations are under way for the start of this year’s Hajj pilgrimage, and Islam’s holy festival of Eid al-Adha on Monday.

In comments to the Makkah newspaper published on Tuesday, Saudi Arabia’s Grand Mufti Abdulaziz Al Sheikh was quoted as saying that Khamenei’s remarks blaming Riyadh for last year’s tragedy were “not surprising” because Iranians are descendants of Magi.

Magi refers to Zoroastrians and those who worship fire. Predating Christianity and Islam, Zoroastrianism was the dominant religion in Persia before the Arab conquest.

“We must understand they are not Muslims, for they are the descendants of Majuws, and their enmity towards Muslims, especially the Sunnis, is very old,” Saudi’s grand mufti said, according to the AP news agency.

Khamenei, in remarks published on his website on Monday, started the verbal jousting, accusing Saudi Arabia of denying medical treatment to the victims of the 2015 Hajj crush.

“Heartless and murderous Saudis locked up the injured with the dead in containers – instead of providing medical treatment and helping them or at least quenching their thirst. They murdered them,” Khamenei wrote on his website, AP reported.

Khamenei also urged Muslims around the world to reconsider Saudi Arabia’s custodianship and management of Islam’s holiest sites, including in Mecca where the Hajj is performed.

Riyadh said 769 pilgrims were killed in the 2015 stampede and crush – the highest Hajj death toll since a crush in 1990. However, counts of fatalities by countries who repatriated bodies showed that more than 2,000 people may have died in the crush, more than 400 of them Iranians, according to news agencies.

Khaled Batarfi, senior columnist with the Saudi Gazette, told Al Jazeera that the rebuke to Saudi Arabia over last year’s tragedy contrasted with Iran’s health minister, who said during a visit to the country at the time of the accident that Saudi authorities had provided all needed medical assistance and care to victims of the crush, including Iranian pilgrims.

Iran has long attempted to politicise the Hajj, Batarfi said, including political marches at the pilgrimage against the US, Israel and Jews that “were not acceptable”.

“This is a place where other pilgrims need serenity … to feel at peace,” he said, adding that citizens of more than 50 nations participate in the Hajj each year and keep politics out of it.

“Except the Iranians. They insist year after year on doing that, and every time they do that … is a crisis happens, accidents happen,” he said.

In late May, Saudi Arabia and Iran failed to reach a deal on arrangements for Iranians to attend this year’s pilgrimage to Mecca, with officials from both countries trading accusations on who was to blame for the impasse.

Late on Monday, Saudi state news agency SPA quoted the country’s Crown Prince Mohammed bin Nayef as saying that Iranian leaders were responsible for keeping their own people from the Hajj by attempting to politicise the pilgrimage.

“The Iranian authorities are the ones who don’t want the Iranian pilgrims to come here for reasons concerning the Iranians themselves and in light of them seeking to politicise Hajj and turn it into rituals against Islam’s teachings and that compromise the safety of Hajj,” the crown prince said, according to Reuters news agency.

Tehran and Riyadh severed diplomatic relations in January after Saudi Arabia executed 47 “terrorists”, including a Shia religious leader and a convicted al-Qaeda leader, and angry Iranian crowds stormed the Saudi embassy in Tehran. 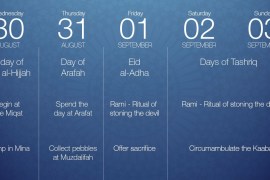 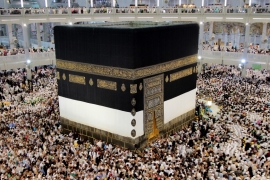