Hurricane Newton travelled half the length of Baja California on Tuesday. It made landfall before dawn on Tuesday and the eye went over the resort of Cabo San Lucas.

Wind gusts were recorded inland of just under 190 kilometres per hour at 250 metres above sea level, up in the hills, and a steady blow of 130km/h was recorded at around 2,000 metres.

Cabo has been rated by TripAdvisor contributors as one of Mexico’s top five tourist destinations and Cabo, together with San José del Cabo, are known as the twin resorts of Los Cabos. Surprisingly, but maybe luckily, this is low season for holiday-makers.

Hurricane Newton knocked out power in parts of Los Cabos, but residents were spared the kind of extensive damage seen two years ago when Odile came ashore as a Category 3 hurricane.

Palm trees were toppled along Cabo San Lucas’ coastal boulevard and some windows were broken. Army Colonel Enrique Rangel said “There is only minor damage – fallen branches, some fallen banners, some cables … In general, no victims.”

One boat was lost in the Gulf of California and of the five souls on board two died.

Mexico is considered to have one of the best hurricane preparedness processes in the world, so they were ready for Newton. Luckily, the hurricane remained a Category 1, the lowest, on the Saffir-Simpson Scale.

Newton travelled overland during the day to Punta Chivata, then barrelled across the Gulf of California in the dark. These warm waters fed the hurricane but it had lost some strength before it hit the Mexican mainland, at Bahia de Kino, as a tropical storm.

The town of Hermosillo, 100km inland from Bahia de Kino, reported a gust of 137km/h as Newton went past.

The former hurricane is forecast to cross the Sonoran desert and reach southern Arizona during Wednesday night.

Tucson is the city most likely to be struck by what will then be tropical rainstorms. Flash flooding is likely in southern Arizona and New Mexico as up to 150mm of rain is forecast to fall. 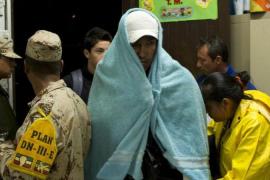 Storm packing winds of 195km per hour makes landfall and heads northwest as forecasts warn of floods and mudslides. 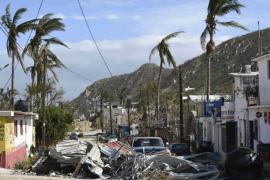