New York – The public holiday that kick-starts the home stretch of frantic campaigning for the US presidential election was dominated by two familiar questions – whether Donald Trump is stable enough, and whether Hillary Clinton is trustworthy enough, to run the country.

Republican presidential nominee Trump and Clinton, his Democratic rival, both flew to the battleground state of Ohio on Monday for a Labour Day holiday that signals the start of two final months of handshaking and speech-making before the November 8 ballot.

Trump met union members in Cleveland and attended a state fair, while Clinton, speaking with reporters before marching in a Labour Day parade, said the race had become a “mad dash” for the White House.

Though she leads Trump in an average of polls by some four percentage points, Clinton was on the back foot again this weekend after the latest in a series of damaging revelations over her use of private email while serving as secretary of state.

On Friday, the FBI released 58 pages of notes from a probe that ended with the agency’s director James Comey declaring that Clinton and her staff had been “extremely careless” when handling classified information.

Trump still trails Clinton in many battleground states where the election is likely to be decided, but he has drawn close to her in others.

The forecaster FiveThirtyEight gives Clinton a 72.3 percent chance of winning, against Trump’s 27.7 percent.

Trump’s rebound from a series of self-inflicted blows has followed the hiring of new campaign managers.

The coiffed property mogul is showing more discipline at rallies, reading from teleprompters rather than risking more off-the-cuff gaffes.

But Trump’s visit to a largely African-American church congregation in Detroit on Saturday highlighted how much work he still has to do with blacks, Latinos and other minority groups. Outside, scores of protesters chanted: “No justice, no peace.”

“As the homestretch of the election begins, it is increasingly clear that it will be a referendum on Trump. Despite what his campaign says, they face an uphill battle, and it resembles Mount Everest,” Jonathan Cristol, a scholar from the World Policy Institute think-tank, told Al Jazeera.

Last week, Trump’s campaign team celebrated a success after the New York businessman made a quick trip to Mexico, appearing side by side with Mexican President Enrique Pena Nieto after talks about Trump’s wall-building and anti-immigrant policies.

An immigration speech Trump gave after his trip to Mexico, however, drew criticism from some of his Hispanic supporters and several backers advising him on the issue decided to split from his campaign.

“Trump is hoping that he can do something similar to the UK’s Brexit vote, where mobilising a populist fear of immigrants can build a cross-class alliance of white people at a time of deep economic insecurity,” New York University scholar Arun Kundnani told Al Jazeera.

“It may work, but it looks like the demographics won’t enable that to happen in the US like it did in Britain.”

This pivotal month of campaigning culminates in the first presidential debate on September 26 at Hofstra University in Hempstead, New York.

The televised face-off could be one of Trump’s last chances to stop Clinton’s return to the White House.

But it remains unclear how the brash insults he used to sideswipe rivals in the earlier Republican-only debates will translate into a one-on-one with Clinton, an experienced debater who can reel off policies and statistics.

As preparations for the debates are well under way, critics say the entry rules are too tough. Candidates must average at least 15 percent support in national polls to win a spot on the stage – a bar that will likely exclude such alternatives as the Libertarian Gary Johnson and the Green Party’s Jill Stein.

Jeff Cohen, an Ithaca College media scholar, said more candidates from across the political spectrum deserve a place on the presidential debate stage as voters are abandoning the major parties in ever-greater numbers.

“The two major party candidates are the least popular in recent US history and the two major parties have less support than at any time in modern history,” Cohen told Al Jazeera.

“The US is the first modern democracy, and our presidential elections have become a sham, where we’re deciding who to vote against from two unpopular candidates.”

In addition to her debating skills, Clinton has millions of dollars at her disposal to air television adverts and power a get-out-the-vote operation in toss-up states. She raised a combined $143m in August for her campaign and her party – her best month of fundraising yet.

She started September with more than $68m in her campaign’s bank account to use against Trump, who has not yet released initial fundraising totals for August.

“The homestretch of the election is not going to be about changing the minds of voters in suburban Philadelphia, but about organisation and turnout. At this point, I doubt there are many people who are undecided about Trump,” said Cristol.

“Trump knows this, which is way he has essentially called for a campaign of intimidation at polling places, and has started to question the legitimacy of the American system.” 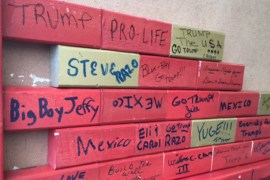