The United States and Russia came up short on Sunday in attempts to finalise a ceasefire deal in Syria, as US President Barack Obama said “grave differences” remained and fighting on the ground continued.

Russia and the US have been striving for weeks to secure a ceasefire between Syrian President Bashar al-Assad’s government and moderate rebels that would expand humanitarian access to hundreds of thousands of civilians caught in the crossfire.

The strategy has hinged on an unlikely US-Russian militarily partnership against “extremist groups” operating in Syria. But beyond the Islamic State of Iraq and the Levant (ISIL) and al-Qaeda, Moscow and Washington have conflicting views about who fits in that category.

“We’re not there yet,” Obama said on Sunday on the sidelines of the G20 economic summit in Hangzhou China.

“It’s premature for us to say that there is a clear path forward, but there is the possibility at least for us to make some progress on that front.”

Negotiations between US Secretary of State John Kerry and Russian Foreign Minister Sergey Lavrov were set to continue in China on Monday.

Russia and the US have backed opposing sides in the conflict.

Moscow has supported Assad and Russian fighter jets have been targeting rebel forces for nearly a year, while Washington has supported some rebel groups fighting under the banner of the Free Syrian Army.

Negotiators had been hopeful a deal could come together during G20, and American officials on Sunday were optimistic enough that they invited reporters to a planned announcement by Kerry and Lavrov. But officials removed Lavrov’s podium just before Kerry came out – alone – to announce that no agreement had been finalised.

“We’re not going to rush,” said Kerry, who has negotiated several failed truces with Russia over the past few months.

The US diplomat said the two sides had worked through many technical issues, adding, however, that Washington did not want to enter into an illegitimate agreement.

Russia’s Deputy Foreign Minister Sergei Ryabkov, also speaking on the sidelines of the G20, said a deal was close but that the timing of any announcement could not be predicted.

“We are talking about most serious issues of implementing a ceasefire,” he told Reuters news agency. “We are close to the deal … but art of diplomacy requires time to implementation. I can’t tell you when the agreement will be reached.”

But the Syrian opposition remained firm in its stance that Assad could play no part in any political transition.

“The coalition said no when [UN special envoy for Syria Staffan] de Mistura submitted [a similar] document last year … but he unfortunately kept the points where Bashar al-Assad will remain [as president] during the transitional period, which is not acceptable for us,” Nagham al-Ghadri, a member of the opposition’s Syrian National Coalition, told Al Jazeera.

Ghadri said key figures from the political and armed opposition were set to meet this week in the UK capital London and would be announcing a response – “not in detail, but headlines” – to the proposed ceasefire plan.

In recent days, the US State Department has said it only wants a nationwide ceasefire between Assad’s military and the rebels, and not another “cessation of hostilities” that is time-limited and only stops fighting in some cities and regions.

Negotiators on both sides have spent weeks poring over maps of potential areas where opposition groups operate and where Assad’s forces would be prohibited from launching air strikes. The idea is for Russia to use its significant influence over Assad to ensure compliance with the deal.

But the US is wary about military coordination with Russia, who it says has mainly targeted moderate, US-backed opposition groups in a bid to prop up Assad. The US wants Russia to focus exclusively on ISIL, also known as ISIS, and al-Qaeda-linked groups.

Neither side explained on Sunday in detail what sticking points remained.

Kerry said that the US wanted a deal with the best chance for survival, but Ryabkov, Lavrov’s deputy, said Washington had to dissociate itself from groups links to the group previously known as al-Nusra Front.

“Many of the groups considered acceptable by the US have actually affiliated with the Nusra Front, while the Nusra Front is using them to avoid being attacked,” Ryabkov told Russian media, citing a longstanding complaint of his government.

Earlier this year, the Syrian opposition accused Moscow and Damascus of using the close proximity of al-Nusra Front to more moderate rebel groups as a pretext to bomb the latter.

Meanwhile, as ceasefire terms were being discussed in China, pro-government forces were on the offensive in Aleppo in northern Syria, in a push to retake a key area seized by rebels last month.

Government forces recaptured the Weaponry College and the Air Force Technical College in the strategic Ramosa military complex on the city’s southwestern outskirts, according to a rebel official and a monitor.

Rebel forces captured the area last month in an assault that broke through a government siege on Aleppo’s opposition-held eastern neighbourhoods – home to some 300,000 people.

If the government manages to retake the entire Ramosa area, the assault would effectively reimpose the siege on rebel-held east Aleppo.

Zakaria Malahifji, of the Fastaqim rebel group, confirmed reports that the two colleges had been recaptured by government forces.

The British-based Syrian Observatory for Human Rights, which monitors the war, said later that government forces had also recaptured the Artillery College. 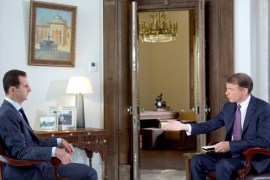 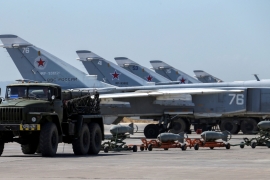