Delegates from one of Myanmar’s most heavily armed ethnic groups have stormed out of peace talks aimed at ushering in a new era of peace in the country.

Representatives of the powerful, 20,000-strong United Wa State Army (UWSA) walked out of the peace talks on their second day Thursday, reportedly after being told that they could not address the gathering in the capital Naypyidaw.

The departure of the Wa representatives was a “misunderstanding” that could be solved, government peace negotiator Khin Zaw Oo told the AFP news agency.

Myanmar’s de facto leader Aung San Suu Kyi has been informed and “gave instructions that the peace process not be harmed because of this case”, government spokesman Zaw Htay told reporters.

A spokesman for the Wa told the Democratic Voice of Burma media group that the delegates left after being told they were only accredited as observers to the peace talks, which was discriminatory.

The five-day conference in Myanmar’s capital Naypyidaw has been hailed as the best chance in a generation for the country to end wars with ethnic minority groups that have raged for up to 70-years, claiming thousands of lives and keeping the country mired in poverty.

The UWSA stopped fighting the government some years ago in exchange for control of a remote portion of territory bordering China which is now a notorious drug manufacturing hub.

Analysts accuse the Wa of producing and trafficking huge amounts of methamphetamine and heroin from their secretive base and buying weapons with the proceeds.

The UWSA originally refused to attend this week’s talks, arguing they signed their own ceasefire with the previous military government back in 1989.

But the WA eventually agreed to attend following discussions last month with Aung San Suu Kyi and after pressure was applied on the Wa by China, which retains significant influence over the group, whose area of control is located near the Chinese border.

Lian Hmung Sakhong, from the Chin National Front, another ethnic group at the talks, denied the Wa were treated unfairly.

“We give equal rights to them and gave them a front row seat. I would like to confirm again that we did what they demanded,” he said.

Myanmar’s government has fought ethnic armed groups almost without a break since the end of the World War II, as rebels pushed for recognition of their rights and greater autonomy from the central government.

Aung San Suu Kyi has devoted her first few months in power to planning the peace summit, where she hopes to thrash out the precepts of a federal state in exchange for peace. 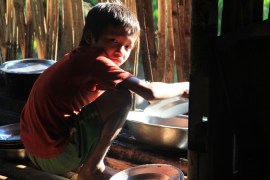 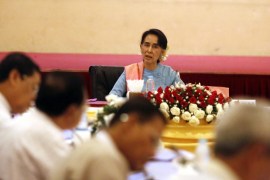 Delegates gather in Naypyidaw for meeting aimed at ending separatist insurgencies that have claimed thousands of lives. 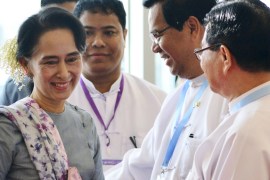