The chief of Chicago’s police department has recommended that five officers be fired over their role in the 2014 shooting death of a black teenager, an incident that heaped national scrutiny on the nation’s second largest police force.

Superintendent Eddie Johnson recommended to the Chicago Police Board that officer Jason Van Dyke, who shot Laquan McDonald 16 times, be fired, along with another four officers.

The shooting made headlines across the country and led to protests after the release of a dashboard video more than a year after the incident.

The video shows the officer continued to fire after McDonald, 17, had fallen to the ground.

It also comes amid a string of high-profile killings of black men by police in various US cities in the past two years which have renewed a national debate about racial discrimination in the American criminal justice system and given rise to the Black Lives Matter movement.

Johnson’s recommendation marks the start of formal proceedings in the officers’ firing.

The Police Board, whose nine members are appointed by Mayor Rahm Emanuel, must consider it and then make the decision on firing the officers.

According to charges released on Tuesday, all allegedly made false or inaccurate statements about the circumstances surrounding McDonald’s death.

“The Superintendent has recommended that each of the five officers be discharged from the Chicago Police Department,” a statement from the Police Board said. “The public is reminded that the filing of charges is not evidence of guilt.”

An initial status hearing for the cases is scheduled for September 19.

The police reports on the October 2014 shooting conflicted with video footage of the incident, sparking accusations that Van Dyke’s fellow officers were trying to cover up an unjustified shooting.

Emanuel fired police Superintendent Garry McCarthy in the wake of the video release, and thousands of protesters took to the streets of Chicago over McDonald’s death and the subsequent handling of the case.

Initially Johnson recommended that 10 officers be sacked, a number that dropped to seven because some officers retired, among other reasons, the Chicago Tribune reported. It was unclear why that number dropped to five officers.

On Tuesday, Emanuel unveiled a proposed Police Accountability Ordinance to overhaul current oversight in a move to ensure “investigations of officers are independent, fair, timely and transparent”. Chicago City Council will vote on it on September 29. 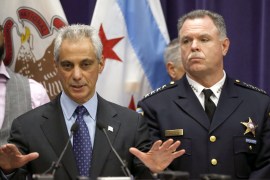