Turkish President Recep Tayyip Erdogan has vowed that Turkey will show the same determination in fighting the Islamic State of Iraq and the Levant (ISIL) group and Syrian Kurdish fighters, on the fifth day of a cross-border operation that has already left dozens dead in northern Syria.

Speaking on Sunday in Gaziantep in southeast Turkey, where 54 people were killed in a suicide attack at a Kurdish wedding last week, Erdogan said: “We cannot tolerate any terror organisation within, or close to, our borders.

“That’s why we are in [Syria’s] Jarablus. And, if necessary, we will not flinch from taking on similar responsibilities in other areas.”

The UK-based Syrian Observatory for Human Rights said at least 40 civilians were killed in separate Turkish strikes near the village of al-Amarneh and in Jeb al-Kussa, outside Jarablus – the first reports of significant civilian casualties since the start of Turkey’s operation on Wednesday.

The group, which monitors Syria’s war, also said that at least four Kurdish fighters had been killed and 15 wounded in the bombardments south of Jarablus.

But Turkey denied the reports of civilian deaths, saying that its raids had killed 25 Kurdish “terrorists”, according to the state-run Anadolu news agency.

In a statement, the Turkish armed forces said that the air campaign was carried out against “terrorist groups” which had attacked Turkish soldiers supporting a Free Syrian Army (FSA) operation in Jarablus.

On Monday, the US criticised the clashes in northern Syria, terming them “unacceptable” and called on all armed actors in the fighting to stand down and focus on the fight against ISIL.

Meanwhile, at the Gaziantep rally, Erdogan told thousands of flag-waving supporters that “operations against terrorist organisations will continue until the end”.

“We will make any kind of contribution to the work to clear Daesh from Syria,” he said said using an Arabic acronym for ISIL, also known as ISIS.

“For the issue of the PYD [Democratic Union Party] terror group in Syria, we have just the same determination,” he added, referring to the main pro-Kurdish party and its military arm in northern Syria.

Turkey has long accused the YPG of being linked to the outlawed PKK in the southeast of the country. The YPG is the military arm of the Syrian Kurdish PYD political party.

Turkey has ordered the YPG, a well-trained force that has been the US-led coalition’s most effective ground partner in the war against ISIL, to withdraw to the east bank of the Euphrates River, which crosses the Syria-Turkey border at Jarablus.

“And he says his country will definitely use whatever it has to defeat these groups.”

He said the Turkish army had been “shelling and launching air strikes” in areas controlled by the YPG.

“These are areas that Turkey has asked the YPG to pull out of. The YPG insists those areas are part of their own territory, and there’s no way it will pull out. That will likely increase tension.”

During his Gaziantep speech, Erdogan also said that Turkey’s cross-border offensive into Syria was giving people who fled ISIL-controlled areas a chance to return to their homes, including to Jarablus.

“Jarablus has been freed,” said Erdogan. “The original inhabitants of Jarablus are now in the process of going back.

“Anyone who wants to go back to Jarablus, will be given any support they need from us.” 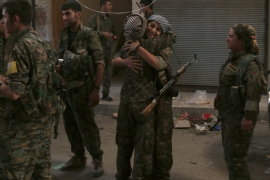