A firefighter has written an emotional letter to an eight-year-old girl who died shielding her little sister when a powerful earthquake hit parts of Italy last week.

More than 290 people were killed and many more were injured by the earthquake and the country observed a national day of mourning on Saturday with flags at half-mast amid a state funeral for the victims.

“Hello little darling. I only managed to lend a hand to pull you out of your prison of rubble,” read the letter.

“Forgive us for arriving too late but you had stopped breathing by then. I want you to know that we did all we could to get to you.

“When I go to my home in L’Aquila, I will know that there is an angel watching over me from above. You will be a shining star in the night.”

The girl’s four-year-old sibling survived 16 hours under the rubble before she was pulled out by rescue workers.

“She’s doing well and the swelling has gone down,” her cousin Alex told Al Jazeera from a camp set up for those who lost their homes.

“She’s getting better, playing with dolls and watching cartoons. She’s four and spent 16 hours under the rubble, it’s a miracle [that she survived].”

The first funerals were held on Friday in Pomezia, south of Rome, home of six of the victims.

Al Jazeera’s Sue Turton, reporting from the town of Ascoli Piceno in the Marche region, said there was an “incredibly sorrowful” atmosphere at the funeral.

She said while most relatives who lost loved ones are still in shock, some are angry that it took rescue crews so long to reach badly hit villages.

Some are also questioning why supposedly quake-proof buildings collapsed. 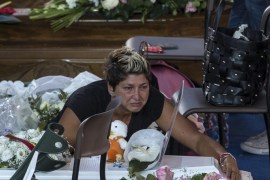 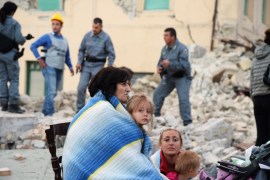