Family members and employees of a former brigadier-general of the Bangladesh army say that he was picked up from his home by law-enforcement authorities and is now being secretly held in state custody.

Abdullahil Amaan Azmi was allegedly taken blindfolded from his family home in the South Asian country at 8pm on August 22.

He is the son of Ghulam Azam, a Jamaat-e-Islami leader, who died in jail in 2014 after an earlier conviction for crimes against humanity during the country’s 1971 independence war.

Azmi was dismissed from the army in May 2009, five months after the Awami League government came to power.

The detention of Azmi is the third incident this month where witnesses claim that the son of an opposition leader, convicted for war crimes in 1971, has been taken into secret custody.

Salauddin Quader Chowdhury, former leader of the Bangladesh Nationalist Party, was convicted for war crimes and executed in 2015.

His 33-year-old son, Hummam Quader Chowdhury, was taken from his car in the early hours of of August 4, according to those also in the vehicle with him.

A mere five days later, on August 9, the wife and sister of 32-year-old Mir Ahmed Bin Quasem allege that he was picked up by authorities late in the evening.

He is the son of Mir Quasem Ali, a former Jamaat leader, whose final appeal against execution for war crimes is about to be decided by the Supreme Court.

In all three cases, the police deny any involvement in the detention.

Masudur Rahman, spokesman for the Dhaka Metropolitan police, said: “We did not pick [Azmi] up, okay?”

When asked whether any other law-enforcement agency had done so, he said: “I don’t know, I am only responsible for the Dhaka Metropolitan police.”

None of the men has been brought to court within 24 hours of their alleged detention, as the law requires.

Abul Kalam Azad, one of six people employed at Azmi’s house in Mogh Bazaar, said that more than 30 plain-clothed men cordoned off the house on Monday evening and proceeded to search “every single flat of the building”.

He said that the men initially introduced themselves as “people from the administration”, but later asserted they were “DB”, which stands for Detective Branch of the police.

“I was downstairs and some of the men started asking me about where was Azmi sir. I told them I was not sure,” Azad recalled.

“Since they were not getting Azmi sir, they blindfolded my eyes and started beating me. I repeatedly said I do not know his whereabouts.”

The men broke down the door of a locked, empty flat on the fifth floor and found Azmi.

Azad claims that he heard Azmi say to the men, “Since you are going to take me, let me take some clothes”, but his plea was rejected.

Azmi was then escorted to one of the vehicles at which point, according to Azad, he was blindfolded.

The men took mobile phones from the house and the discs linked to local CCTV cameras.

The three detentions follow the Bangladesh government’s concern about a decision given at the end of July by the county’s highest appeal court to adjourn a hearing involving the final appeal by Mir Quasem Ali against his execution.

Later that day, newspapers reported that ministers had “expressed fears” that the convicted Jamaat leader, a businessman, would use the adjournment time to “plan extremist attacks … to disturb the country’s stability”.

Sheikh Hasina, Bangladesh’s prime minister, was also quoted as saying that new “terror attacks” were being planned and that “their goal” was “to free Mir Quasem [Ali]”.

The families of all three men deny any involvement in the ongoing activist attacks, which in early July resulted in the murder of 20 people, mostly foreigners, at an upmarket restaurant in the country’s capital.

This attack was claimed by the Islamic State of Iraq and the Levant (ISIL) group.

Ever since ISIL, also known as ISIS, first claimed responsibility for a murder in Bangladesh of  Italian citizen Cesare Tavella in Dhaka in September 2015, the government has pointed an accusing finger at opposition parties.

The Appellate Court is due on Tuesday to pass its order on whether Mir Quasem Ali should be executed, and following the verdict, the death penalty could be carried out within days.

Salman al-Azmi, Azmi’s UK-based brother, told Al Jazeera that the police were refusing to receive a complaint – known as a general diary or GD – about the detention of his brother.

“The manner in which the series of abductions have taken place and no one has been accounted for so far, we fear the worst and are deeply worried about his safety,” Salman al-Azmi said.

“We are not able to guess what the government wants to achieve through this illegal abduction and what they intend to do with my innocent brother.”

Mashiur Rahman, the officer in charge of the local Ramna police station, acknowledged that the family had come to make a complaint.

“The matter was so sensitive, so I told them that they should let us investigate the matter first before filing a GD,” he told Al Jazeera.

With reporting by Muktadir Rashid in Dhaka 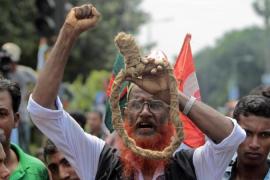 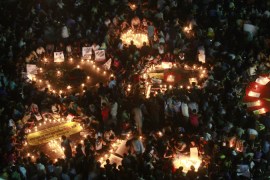 Tens of thousands of protesters rally across country, calling for convicted Jamaat-e-Islami leader to be hanged. 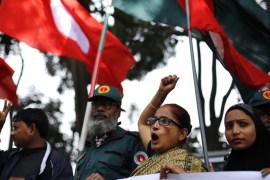