Peanut producers in Haiti have united to block the delivery of a 500-tonne shipment of nuts from the US.

They say the shipment threatens to undermine the livelihood of thousands of people in the country.

According to the World Bank, extreme poverty in the country has fallen from 31 to 24 percent over the past decade but it remains the poorest country in the Americas and one of the poorest in the world, with a GDP per capita of $846 in 2014.

The US Department of Agriculture argues that the shipment is a donation to alleviate hunger among Haitian schoolchildren but the locals are strongly opposing the move.

“Our peanuts are natural, we can use them over and over again,” farmers’ leader Josapha Antonice Guillaume told Al Jazeera.

“We don’t modify our crops. We will not accept anyone or any institution that tries to destroy them. We will fight. Peanuts are part of our heritage.”

More than 50 groups of farmers and aid workers, both Haitian and foreign, have issued a joint statement calling on the US to stop the shipment.

“The dumping of these peanuts will create a big catastrophe, even bigger than the destruction of our rice production,” said Jean Pierre Ricot, an agriculture expert.

“Hundreds of thousands of families lost their livelihoods because of those policies. To face the problem, we need a fundamental battle to stop these policies.”

Some international aid experts warn that the US peanut donation could eventually become another cautionary tale about humanitarian aid from a wealthy nation that undermines a flimsy economy in a poor one. 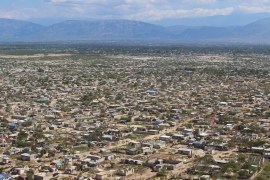 Haiti earthquake: A new start in Canaan for survivors 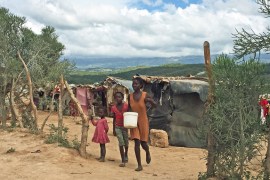 ‘Life without dignity’ for stateless on Haiti border

Thousands from the Dominican Republic are deported to Haiti camps where cholera is a major problem.