Beirut – It’s a warm Friday evening in May, and hundreds of families, young couples and groups of friends are packed into Beirut’s Masrah al-Madina for an event promoting the boycott of Israel. They sing along to a song played by oudist Charbel Rouhana and vigorously applaud a video message on the subject by Marcel Khalife.

At the end, a short animation plays, encouraging people to download a new mobile app that enables them to instantly check whether a product is made by a company that directly supports Israel.

It’s a slick bit of technology created by the group behind the event, the Campaign to Boycott Supporters of Israel in Lebanon, which was founded back in 2002 and is arguably the oldest organised effort to peacefully challenge Israel’s occupation of Palestine on an economic and cultural level.

“The issue here is that … we need to mobilise the people. Since the Lebanese state does not want to get involved, we need such events to get people interested,” said Nael Kaedbey, a 34-year-old lawyer attending the event. He added that the campaign’s app was crucial, “because a lot of people don’t know what should be boycotted or not”.

Although Lebanon is part of the Arab League boycott of Israel and passed its own law forbidding any direct relations with Israel – officially considered an enemy state – back in 1955, the principle of boycott is inconsistently enforced.

Companies commonly targeted for boycott, such as Coca-Cola or G4S, work and sell their products in the country, while political parties from across the spectrum do not openly support the idea for fear of negative economic repurcussions.

Further, despite widespread hostility towards Israel, which has heavily bombed swaths of Lebanon on various occasions and occupied the south for nearly two decades, individual observance of the boycott among the public is low, according to Campaign activists.

To address this, the app hopes to make the campaign’s extensive research into such companies more widely available, and promote a greater culture of grassroots boycott in Lebanon.

“There is nothing natural about boycott unfortunately,” explained Samah Idriss, one of the founders of the campaign, talking to Al Jazeera in a cafe in Hamra street as he shook his head.

He is fresh from a press conference condemning French-Lebanese author Amin Maalouf for giving an interview to Israel-based media outlet i24. The press conference, however, was not as well attended as Idriss had hoped. “It is not something to be taken for granted. Especially in an era when nihilism and defeatism is spreading all over.”

Idriss, a tall man with a relaxed manner and serious face, was for many years the public face of the campaign group owing to his dedication, eloquence and position as editor of the radical literary magazine Al Adab, founded by his father back in 1953.

These days, he says, others in the campaign have taken up the role of representing it, but he remains among the few people who have been around since it was founded 14 years ago.

Idriss’ personal boycott journey, however, began back in November 1977, when he was protesting against Egyptian President Anwar Sadat’s controversial decision to visit Tel Aviv, a total first in the Arab world at the time. Idriss was just 15.

“My family has a lot to do with it, particularly my father,” said Idriss, referring to Suhail Idriss, a well-known intellectual, writer, translator and publisher who died in 2008. “It all came from my family and also from the fact that I lived in a Beirut quartier that was boiling with events: Tariq Jdeideh.”

We were supporting Israel even while we were demonstrating against it by drinking Coca-Cola, showering using Johnson & Johnson or by using Caterpillar to demolish old buildings.

Samah Idriss, one of the founders of the Campaign to Boycott Supporters of Israel in Lebanon

“That was the headquarters for all the Palestinian factions and it was near Sabra and Shatila [Palestinian camps],” he added.

“Any event in the whole world would take place there. If China invaded Vietnam, Palestinian factions would support Vietnam and hold a meeting and I would attend. Living there was crucial to my upbringing as an activist.”

Decades later, enraged by the deadly Israeli assault on Jenin camp in the northern West Bank in 2002, this upbringing of activism would prompt him, along with several others, to found the campaign group, which predates the better-known global BDS Movement by several years.

“Previously there had been groups in the Arab world, particularly in Egypt, that were anti-normalisation … and of course the idea of boycott already existed from the South Africa model,” he explained. “We felt that demonstrations were no longer sufficient, that … shouting with bombastic slogans served nothing except to relieve oneself of pressure and anger.”

That research – carefully conducted and constantly reviewed using information provided on the companies’ own websites – has since become a cornerstone of the campaign’s work. They also work in the cultural sphere checking – with the help of the BDS Movement – the backgrounds, affiliations and performance histories of musicians, artists and filmmakers coming to Lebanon.

It is this work that has caused the most ripples. They successfully called for the movie ‘The Attack’ to be banned locally owing to the fact that the Lebanese director had filmed much of it in Tel Aviv with Israeli crew members and actors.

They also called on people to boycott a concert in Lebanon by the rock band Placebo, and were subsequently sued by the event organiser for allegedly causing a drop in ticket sales. The case has since been dropped.

Still, Idriss is sceptical about how deep the campaign’s messages have penetrated Lebanese society, with awareness about implicated companies – in particular –  still low despite widespread support for the general idea of boycotting Israel.

Rania Masri, associate director at the American University of Beirut’s Asfari Institute for Civil Society and Citizenship, agreed.  “I doubt the majority of Lebanese are aware of the extent of Zionist penetration,” Masri, also an activist on the issue, told Al Jazeera. “They [the campaign] are extending their outreach to work with Palestinian camps, schools, etc. There’s a lot more to be done.”

However, she added that awareness of the existence of the campaign was likely to be much higher. “If you just look at the broad media coverage, I would argue that anyone who reads the mainstream newspapers has heard of us.”

Regardless, it is clear that outside the Occupied Territories, the campaign easily represents the strongest boycott movement in the region, which Idriss partly ascribes to the fact that the fate of the Palestinians is no longer a priority in the wake of the Arab Spring as citizens fight to secure their own basic rights.

When asked if he was optimistic, Idriss simply shook his head. “To me optimism is not even a question. I am not an optimistic person. There’s nothing in the Arab world that makes you optimistic about anything.”

He paused before adding: “This lack of optimism could make someone bitter, but I’m not bitter. So as long as the cause is just, then I’m willing to do anything, even if I’m all by myself.” 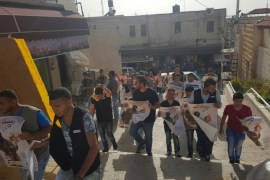 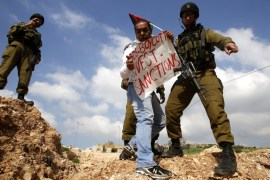 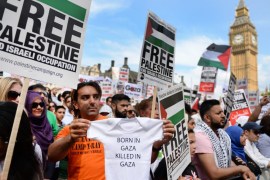