Built more than 2,000 years ago, the Tower of the Winds is said to be the world’s first weather station.

Used by merchants to tell the wind and time – even in darkness – the station is still standing on a slope on Athens’ ancient Acropolis hill and has been restored and re-opened to the public for the first time in nearly 200 years.

The greatest mystery was how that clock worked at night.

The most prominent theory is that a hydraulic mechanism powered a water-clock device, using a stream flowing from the Acropolis hill.

“It is located in the Roman Agora [market place] as it was of great value for the merchants to read the weather and also tell the time their goods would arrive.”

The Tower is credited to the architect and astronomer Andronikos of Cyrrhus. It is nearly 14m high and on top of its fully preserved roof made of 24 marble slabs, rests a Corinthian capital.

At the top of the octagonal tower, there is a frieze of one of each of the eight Anemoi: wind gods of Greek mythology.

On the floor of the tower are carved lines for the water clock and on the outside walls there are marks for a sundial.

It is believed that a bronze figure of Triton was sitting on the roof holding a rod and turning with the wind.

The building has had many guises over the years and the Whirling Dervishes were the last occupants.

The monument has been largely shut since they left in 1828.

It is no longer a weather station or even a 24-hour clock. The mechanism is believed to have been stolen during the Roman period. 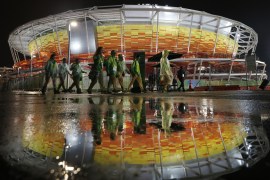