The moment a Starbucks cafe in the US state of Indiana was destroyed by a tornado has been captured on camera.

The video, shot on Wednesday on a mobile phone through the window of a bar across the street, shows the entire front wall and facade of the building in the city of Kokomo collapsing.

As well as destroying the coffee shop, the tornado also caused substantial damage to the nearby Markland shopping centre – only two of many buildings in the area to be hit by the storms.

A total of 42 tornadoes were reported in the Midwestern states of Indiana and Ohio.

They caused significant damage, including tossing vehicles into the air, tearing down power lines and ripping roofs off buildings, and left more than 33,000 people without power.

The severity of the tornado in Kokomo prompted authorities to declare a state of emergency.

This is not the first time that the city has been hit by a powerful tornado – in November 2013, two twisters caused severe damage.

But similarly to 2013, the latest tornadoes seem to have avoided causing any serious injuries. 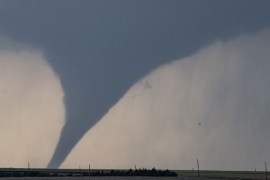 Tornadoes smash through the US Great Plains 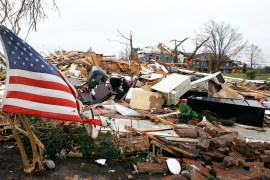 The Sunshine State has been struck by a series of storms that killed two people.