Hundreds of Turkish Airlines (THY) pilots are willing to give up their civilian careers to work for the Turkish armed forces following a failed coup attempt last month, according to the airline’s chairman.

In the wake of the coup bid, Turkey fired a total of 265 pilots from its armed forces for their alleged involvement in the July 15 events, or for having links to Fethullah Gulen, the US-based cleric blamed by Ankara for masterminding the attempt to topple the government.

Speaking to reporters on Tuesday, THY chief Ilker Ayci said pilots in the company with military experience were ready to help address the personnel deficit created in recent weeks.

“There are a total of 800 pilots in the Turkish Airlines who previously worked for the military and 500 of these pilots started working for our company in the past five years,” Ayci said.

“All our pilots are patriots, and most of them are willing to go back to the Turkish armed forces,” he added. “I have sent the list of eligible candidates to the defence ministry,” he said.

THY, which is 49-percent state-owned, is Europe’s fourth biggest carrier.

Overall, there are more than 2,000 ex-military pilots working today in the Turkish civil aviation industry.

A recently issued state of emergency decree paved the way for the return of pilots who previously left or were dismissed from the country’s armed forces.

“Air forces around the world normally have a crew-seat ratio of 1.5 pilot per seat,” said Murat Herdem, news coordinator and columnist for the Turkish aviation website Airporthaber.

“After the purge, this ratio went down to 0.8 in the Turkish air force,” he told Al Jazeera.

As a result of this, he said, the military decided to rely on civilian pilots to continue their operations without disruption.

Commenting on Ayci’s remarks, however, Herdem raised doubts about whether many pilots would be willing to give up their civilian careers to serve in the air force.

“They may say they are willing to do this now,” he said, citing a rise in patriotic feeling following the failed coup attempt, “but when it comes down to actually making the move, most of them will back down.

“Going back to the military does not make any economic sense. They are accustomed to a certain way of life now.”

A THY captain can earn more than $10,000 a month according to their experience level, while a starting salary for a pilot in the company is estimated to be around $5,000.

In an effort to attract more ex-employees currently working for private airlines, the government recently increased the overtime paid to armed forces pilots.

Ayci, the THY chairman, said they were working on a model that would allow pilots to work for a private company and the military simultaneously.

“There are models in the US in which pilots can work both in the army and the private sector. We are examining and working on those models,” he told the Turkish daily Hurriyet on Tuesday.

But even if the government created a pilot-reserve system similar to the US, it would be extremely hard for these pilots to adapt themselves back in to a military mindset and conduct successful operations, Herdem argued.

“This can only be a short-term solution,” he said. “And long-term solutions that are on offer are not looking promising.”

Earlier this month, the Turkish government shut down all of Turkey’s military schools in another state of emergency decree.

The move, which made it impossible for future military pilots to be trained in specialised academies from an early age, has given rise to concerns about the long-term prospects of the Turkish air force.

Following the shutting down of the military schools, Ankara announced changes in the requirements for becoming an armed forces pilot.

Graduates of four-year civilian aviation schools who are under the age of 27 could now apply to become an active officer, the government said in a decree.

But Airporthaber’s Herdem said there was “no proper, functioning civil aviation university” in Turkey.

“How can we expect universities that are failing to train civilian pilots to train military officers?” he said.

The University of Turkish Aeronautical Association, the flagship civilian aviation school in the country, offers only a theoretical education, Herdem added.

“Those students do not get in a plane for most of their education.

“Civilian pilots or students cannot solve the problems that the Turkish military is facing after the coup attempt,” he said.

Turkey, which is currently under a state of emergency, is facing multiple security threats.

As part of a US-led coalition, it is fighting the Islamic State of Iraq and Levant (ISIL) in neighbouring Syria and Iraq.

It is also battling Kurdish separatist rebels in its southeast, where a ceasefire collapsed last July, triggering the worst violence since the 1990s. 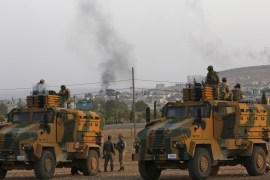 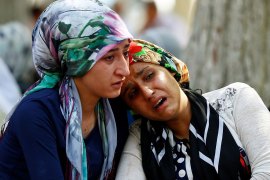 Family and friends of victims killed in a suicide attack on a Kurdish wedding gather to pay their respects to the dead.