“I have friends,” eight-year-old Abdul Karim says from his soft-drink stand inside Iraq’s Ameriat al-Fallujah camp, “but I can’t play with them because I have to work to support my family.”

He is just one of more than half a million Iraqi children being forced to leave school and work as their country remains embroiled in crisis, according to UNICEF, the United Nations children’s agency.

Abdul Karim had to flee his hometown of Fallujah after Iraqi forces launched military operations to retake the strategic city from the Islamic State of Iraq and the Levant (ISIL, also known as ISIS) group last May. The bombing campaign killed his father, forcing Abdul Karim to begin his job hunt. He now sells soft drinks and water in the Ameriat al-Fallujah camp for displaced Iraqis.

“I wish I could go back to school, but now we have nothing. We have lost everything, and I have to be here to provide for my family,” he told Al Jazeera.

In a report published in June, UNICEF noted that “violence and loss of income are forcing more families to send their children to work”. The report estimated that more than 575,000 Iraqi children have been put to work, double the number from 1990.

“Today, Iraq is one of the most dangerous places for children to live – not exactly the country where you wish to be a child,” Maulid Warfa, a regional officer for UNICEF, told Al Jazeera.

The effects of the conflict in Iraq on children are clear: Nearly one in five schools have closed, while more than three million children are at risk of death, sexual violence, abduction and recruitment into armed groups – an increase of more than one million over the past 18 months, according to the UN agency.

“Iraqi children are exposed to danger from a very early age – as early as seven or eight years old,” Warfa said. “They work in chemical factories or in garbage collection sites without any kind of protection. They work for long hours, and you can see them exhausted … [This] is destroying their future, and – as all they want is to play, go to school, and be loved and protected by their families – we still can’t imagine what will happen to them.”

Um Chehab, an Iraqi mother of three, says she has been in despair ever since her husband went missing in Fallujah a year ago. “I do not know if he was killed … I do not have any explanation,” she told Al Jazeera. “All I know is that he left me with three children.”

Child labour in Iraq is extremely difficult to manage in the absence of collaboration between communities, governmental authorities and humanitarian organisations, observers say.

“We are trying to raise awareness among the families about the importance of getting the children back to school, but at the same time we have to work with the authorities in order to support them,” Warfa said. “It is extremely challenging, because the resources are few, but the priorities are many.”

Raad Aldahlaki, a member of the parliamentary committee on human rights in Iraq, noted that the central government bears great responsibility.

“Politicians and state institutions are doing nothing when it comes to dealing with social problems caused by the conflict, and the people are left with no clear strategy from the government on how it will help them,” Aldahlaki told Al Jazeera.

The significant deficits in education and other assistance could contribute to the “growth of extremism, which could lead to a point of no return”, he added.

Iraq’s labour minister, Mohammed Shayaa al-Sudani, acknowledged the dramatic increase in child labour amid the country’s ongoing conflict, noting that the government has been “working closely” with international organisations in an effort to reintegrate working children into school. The government also passed a law restricting the age at which children can legally work, he told Al Jazeera.

But Bushra Amine, an aid worker with the Erbil-based NGO Bo-Peshawa (“Go Forward”), said more must be done: “A whole generation [of Iraqis] has been abandoned. Many of them have already been recruited as killers and thieves by armed groups.”

Amine, however, was firm in defending their innocence.

“We created these criminals,” she said. “We cannot blame them. This is the result of leaving them on the streets without any aid, forcing them to [choose between] collecting garbage or involving themselves in the endless cycle of violence.” 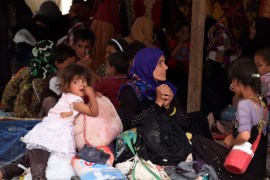 The international community must be more responsive to the needs of Fallujah’s orphaned and brutalised children.