The threats have come via emails, phone calls, and once with flowers delivered directly to the front door.

Amid months of sustained intimidation, harassment and threats, Palestinian human rights defenders are coming forward to denounce a campaign that they say aims to “plant fear” into their efforts to hold Israel accountable for human rights violations.

Earlier this month, Al Haq’s researcher at the ICC, Nada Kiswanson, told the Dutch press that she had received death threats and other intimidations for several months, including letters, emails and phone calls to her home and family members. A man phoned Kiswanson’s family members in Sweden and, in heavily accented Arabic, told them she would “disappear” if her work at the ICC continued, Jabarin said.

Kiswanson also received a call from a woman purporting to be from the Dutch Health Ministry, who asked for her home address to send her a survey and information about the Zika virus. Shortly thereafter, Kiswanson received flowers at her door, a threatening note attached to them. Jabarin said the delivery originated in Amsterdam.

Previous death threats levied against Al Haq staff members have been “directly connected” to their work at the ICC, according to Amnesty International. At the same time, leaflets misrepresenting Al Haq’s work – which featured the organisation’s name and logo and asked for donations in support of refugees – were also distributed to homes in The Hague, Jabarin said.

Dutch authorities have been investigating the Kiswanson case, but Al Haq did not have any information about potential suspects for that or any of the other incidents.

“Israel is behind it,” Jabarin alleged. “Criminals, all the time, they are afraid. When you start searching and looking to identify them, they will become afraid. For them, it’s easy to defeat politicians, but it’s not easy for them to defeat the human rights defenders.”

Defending justice and looking for justice is not a job. We know that we will face difficulties, we will face challenges. And we are ready.

Al Haq is not the only Palestinian rights group to receive threats recently.

Gaza-based organisation Al Mezan said in a news release this month that its workers have faced “a protracted campaign of intimidation, harassment and threats” since last year, including suspicious emails and Facebook messages, along with calls to staff and donors.

Oswald told Al Jazeera that most of the threats were levied against Al Mezan staff while they were working in Europe, with local police investigating threats in three separate countries. While the perpetrators have not been identified, the threats seem to be related to Al Mezan’s accountability work, she said.

READ MORE: Israel ‘narrowing the space for freedom of expression’

Alaa Tartir, the programme director at Al Shabaka, the Palestinian policy network, noted that such threats appear to be motivated by the fear of Israel being isolated internationally and held accountable for its crimes against Palestinians.

The campaign “is an act of fear, first and foremost”, Tartir told Al Jazeera, citing a wider pattern of Israeli intimidation of activists and aid groups. Israel recently announced the creation of a special body to identify and deport boycott, divestment and sanctions (BDS) activists, and has launched a campaign against international aid groups that it alleges diverted funds to Hamas in the Gaza Strip.

Death threats against individuals working at the ICC have intensified recently because that effort “is becoming more tangible [and] more organisations are working together”, Tartir said.

“This is a worrying sign for Israel and its friends, so this is why they are doing what they are doing now,” he said, adding that the international community must ensure human rights defenders are protected and freely able to do their work.

Palestinian human rights workers will continue with their work, despite the intimidation, Jabarin added.

“For us, working in human rights is a belief. It’s faith … Defending justice and looking for justice is not a job. We know that we will face difficulties, we will face challenges,” he said. “And we are ready.” 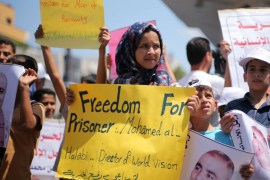 Al Jazeera examines what to expect when Palestine officially joins the International Criminal Court on April 1.