Paul Manafort, the chairman of Donald Trump’s presidential campaign who has been linked to a pro-Russia lobbying scandal, has resigned.

“This morning Paul Manafort offered, and I accepted, his resignation from the campaign,” Trump said  on Friday.

“I am very appreciative for his great work in helping to get us where we are today, and in particular his work guiding us through the delegate and convention process. Paul is a true professional and I wish him the greatest success,” Trump said.

Manafort has drawn fire for millions of dollars in undisclosed payments he allegedly received for lobbying efforts on behalf of a pro-Russian Ukrainian political party.

Trump’s statement on Manafort did not mention the broader campaign shake-up or the Ukrainian lobbying controversy.

Ukrainian anti-corruption authorities said on Friday they were investigating Manafort over allegations related to his work on behalf of a pro-Russian political party.

Manafort “is among those names on the list of the so-called ‘black ledger’ of the Party of Regions”, the Ukrainian National Anti-Corruption Bureau said in a statement.

The documents allegedly show funds allocated to Manafort totalling more than $12.7m between November 2007 and October 2012. But the agency emphasised that it had not determined whether Manafort had actually received that money.

Manafort’s work in Ukraine had been known, a New York Times article this month had exposed the extent of his involvement and fuelled questions about the Trump campaign’s possible pro-Russian sympathies.

Manafort, in a statement earlier this week, has denied any wrongdoing. 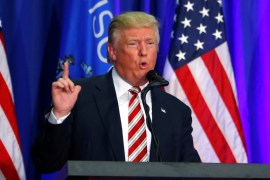