Khartoum, Sudan –  Bushra Alsayim, who has lived in Sudan and abroad, has vivid, fond memories of being a young man in Khartoum.

“I remember when I dressed up very carefully for an outing in the evening, and along with my older brother, his wife and my younger sister, made an excursion into the city,” Alsayim told Al Jazeera. “We went to the cinema. The film that night was an Indian film depicting a mother fighting for the sake of her children. Everybody [in Sudan] was talking about [the movie].”

He falls silent for a few seconds, lost in his memories of that night in 1968. “The most fun we had was … going out as siblings, as a family. Cinema made that [possible].” Alsayim, a long-time cinema enthusiast who now works in the environmental field, said his family “made sure to see American films, Indian films, Arab films.”

But with Sudan’s film industry in a decades-long state of decline, such memories have faded, prompting a number of local groups to launch initiatives in hopes of restoring the magic of film in the country.

Since the early 20th century, when Sudan was under British rule, films have been shown in the country. By 1940, the Sudanese Cinema Company was established, and almost every city had at least one cinema owned by businessmen or traders.

In the 1950s, authorities established the Sudanese Film Unit, a state-run service that produced films about major events, such as presidential visits and significant state projects. Two decades later, in 1970, under the rule of former President Gaafar Nimeiry, the State Cinema Authority was established – replacing the Sudanese Film Unit and commandeering control of cinema content, recalled Sudanese journalist Adil Ibrahim.

For cinema to work, and to be profitable, it has to attract public interest en masse and to be free from restrictions.

“Films propagating liberation movements and socialist trends had priority, and more owners were not as free to run the films they liked,” Ibrahim told Al Jazeera, noting the State Cinema Authority had been dissolved by 1990. “With the region going through an era of Pan Arab nationalism, and the beginning of a socialist-like regime in Sudan at the time, the state started emphasising films with revolutionary content.”

In the ensuing years, however, as Sudan’s civil war took its toll on the country’s economy, cinema became a luxury. Audiences dwindled as people focused instead on obtaining the daily necessities.

Today, most of Sudan’s cinema houses have been shut down or put up for sale. In the past, Alsayim recalled, cars toured neighbourhoods with microphones and huge posters advertising that night’s films; but now, of at least 14 cinemas that were once in business in the greater Khartoum area, only one remains in operation.

Amid this backdrop, an association called the Swiss Initiative – Culture Projects Sudan is aiming to revitalise the country’s cinema scene. The association, a joint venture among Swiss and international filmmakers, is about to begin renovating a historic cinema in Khartoum, which the group hopes can serve as a model for cinema owners in the private sector.

The restoration project, called Open Cinema, will renovate the cinema and equip it with the most up-to-date projection and sound technology.

“The project will be a model for the private sector on how to reopen various cinemas in Sudan which have been closed for decades,” said Ahmed Abdel Mohsen, a Swiss artist and filmmaker who is leading the Open Cinema project.

“We will have to make a decision on which cinema to choose. Currently, we have narrowed down our choices to two in Bahri, northern Khartoum, that were in the past bustling cinemas. The one we will finally decide on will be ready by the end of 2018, and audiences will be able to relive the glory of cinema,” Mohsen told Al Jazeera.

Swiss Initiative – Culture Projects Sudan is also working on a project called 8 Films, which aims to enable eight Sudanese filmmakers and their crews to produce their first professional feature-length films. The project is being funded by UNESCO’s Swiss and Sudanese commissions.

“The necessary know-how will be transferred to the various film crews through a series of lectures and workshops,” Mohsen said. “The film projects will receive individual substantive support and guidance throughout all stages of the production.”

Some filmmakers, however, remain sceptical about the prospects.

“For cinema to work, and to be profitable, it has to attract public interest en masse and to be free from restrictions,” filmmaker Nada Abd Alhafeez, 24, told Al Jazeera, citing excessive state content censorship and high administrative fees for production and commercial work.

Abd Alhafeez, who has completed several films, says she wished the industry in Sudan was more developed, with studios for production and other supports – such as writing and production schools, and government funding – especially considering the rich content available to be filmed in Sudan.

Mohammed al-Mutasim Hakim, a spokesman for the Sudanese National Assembly, contended that government regulations were not responsible for the state of the country’s cinema. “The reasons behind the decline of cinema houses have more to do with the declining interest of capital owners to invest in building, maintaining and running cinema houses as a source of profit,” he said.

READ MORE: Africa on film – ‘We need to be the hero’

Meanwhile, other grassroots efforts are in the works to revive Sudan’s cinema scene. Two years ago, a group called the Sudan Film Factory, along with partner organisations, launched the Sudan Independent Film Festival. This year, the annual festival introduced a new award called The Black Elephant, designed to help Sudanese filmmakers advance their productions. The award assists with funding and networking opportunities.

Suhaib Gism Albari – a member of the Sudan Film Group, a non-profit organisation that works to promote development in the local film industry – is hopeful that things will change for the better in the years ahead.

“Cinema will rise again, and there is a lot of hope, because the people want it,” Albari told Al Jazeera, noting that huge crowds have turned up at recent festivals and shows. “We even carried out a survey in a neighbourhood with a cinema in Omdurman, where people have shown a strong interest in coming to the cinema.”

He is confident that a countrywide survey would show a similar level of interest, but added that a lack of resources has stood in the group’s way. “We charge for subscriptions, and those are our main sources of income,” he said. “This is one of the reasons why our efforts are not as [wide-reaching] as we’d like them to be.”

Ibrahim Hamid, a filmmaker and director with the Sudan Film Group, said he hopes to see more initiatives like this in the future. “Cinema houses are important, because they allow investors to make profits through ticket sales, and this allows them to become interested in bankrolling the making of films,” he said. 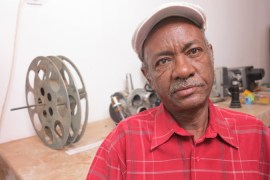 Rigid politics and economic hardship brought an end to the booming film industry, but many are now trying to revive it. 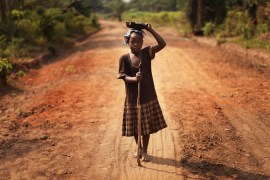