A preliminary investigation at New York’s John F Kennedy International Airport has found no evidence of gunfire inside one of its terminals despite earlier reports of shots being heard, according to the airport’s operator.

No gun casings were found after a search of Terminal 8, where reports of shooting in the departures area on Sunday led to an evacuation, the Port Authority of New York and New Jersey said in a Twitter message.

“The preliminary investigation does not indicate shots were fired at JFK. There are no injuries. At this time, no gun shells or other evidence of shots fired has been found,” the Port Authority said.

Hundreds of people were evacuated “out of an abundance of caution”, according to the Port Authority.

Opinion: Is it still safe to fly?

Panic spread quickly through the crowd as police ordered people to lie on the ground, then evacuated them outside on the tarmac before making them pass through a corridor.

“Get down on the ground!” police officers yelled. “Move, move move!”

Al Jazeera’s Mike Hanna, reporting from New York, said there was a general sense of panic and chaos at the “immensely” busy airport.

“You had a situation that there was a disruption in place. There is general sense of panic that is going on at the moment, and delays that the authorities say were due to an abundance of caution.

“JFK is still at high alert.”

Amelia Mularz, a stranded passenger, was on a plane travelling to Rio de Janeiro in Brazil when her flight was disrupted.

“The flight attendant came and announced that there was an active shooter so that’s why we were not moving. So we’ve been sitting here since then. It’s been three hours now,” she told Al Jazeera.

Sherwin Bryce-Pease, a correspondent for the South African Broadcasting Corp based in New York, was on a Norwegian Airlines flight from Paris that landed at JFK shortly before 10pm EDT (02:00 GMT).

“They told us nothing from the flight deck. Only that the earliest the gate available will be in an hour and 15 minutes from when we landed – an announcement [that was] greeted by huge sighs on our Norwegian Airlines flight from Paris,” he said.

On Saturday, reports of gunfire sent a crowded mall in Raleigh, North Carolina, into chaos.

The Crabtree Valley Mall was placed on lockdown during early afternoon after several shoppers reported hearing gunfire, but a search turned up no suspects or bullet casings. 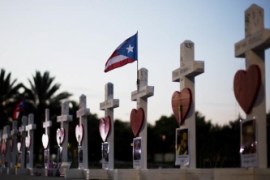 New voices are joining the push for reform, but can they succeed where others have failed?

In the US, an epidemiologist explains why gun violence should be treated as a contagious disease. 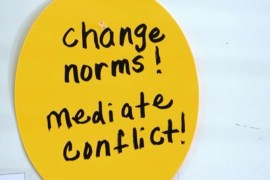