Zambians have voted in presidential and parliamentary elections which saw “a good turnout” and “a calm, peaceful” environment.

Ballot counting began on Thursday evening and the electoral commission said it would be hours before results started to trickle in. Final results are expected by Saturday night.

There’s a lot at stake and the country needs law and order for the economy to stabilise. The cost of living has soared and thousands of people have been laid off in the mining industry.

This is also a historic vote because for the first time it isn’t enough that a presidential candidate gets a simple majority, they need to get more than 50 percent.

This is the fifth election Zambia has held in a decade.

Lungu’s Patriotic Front (PF) was hit by splits and defections to Hichilema’s United Party for National Development (UPND) ahead of the vote.

About 6.7 million people were registered to vote and Lungu’s left-leaning PF faced a tough challenge from pro-business Hichilema’s UPND.

Lungu, 59, became president after narrowly-winning a January 2015 by-election after the death of his predecessor Michael Sata.

If no candidate wins more than 50 percent of the vote, a second round of voting between the top two candidates must be held within 37 days.

The European Observer Mission, which fielded at least 120 monitors, commended Zambians on the large and peaceful turnout on Thursday.

Chief Observer Cecile Kyenge told reporters in Lusaka that at least half of the polling stations across the southern African nation had opened on time at 0600 hours while the rest opened less than an hour behind schedule.

“We are happy to see so many people coming to vote – it shows that Zambians understand the importance of elections and they value their democratic rights,” Kyenge said at Kalingalinga Middle School in eastern Lusaka.

Amos Chanda, special assistant and presidential spokesperson, told Al Jazeera that police had been deployed at strategic points across the country to minimize the risk of post-vote tensions.

Zambia witnessed a wave of pre-election violence in recent weeks, with fighting erupting between opposition and government supporters. Police have also broken up opposition campaigning.

According to the Zambian Elections Information Centre (ZEIC), at least three people have been killed and many injured during campaigning.

“Escalating levels of violence may have a negative impact on the elections and reduce voter turnout,” the ZEIC said in a pre-election report on Wednesday.

Hichilema told Al Jazeera that the ruling PF was trying to restrict the activities of its opponents.

“Let the people of Zambia choose the leadership they want. We will do everything to maintain peace. We want our voters to turn out in large numbers and not fear being beaten by PF thugs out there.”

The opposition has accused the PF of not being able to contain a crisis created by falling prices of copper – the country’s main revenue earner – and drought-induced electricity shortages, which triggered a steep fall of the kwacha currency and spiralling inflation.

Both leaders said they were confident of outright victory, but if neither party can garner more than half of the vote as required by electoral law, a second round of voting would be triggered.

The opposition has said Lungu cannot win the elections without resorting to fraud. The president has threatened to mobilise the army if the opposition rejects the results of the vote. 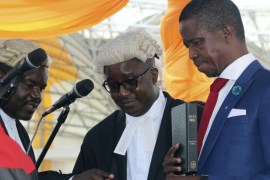 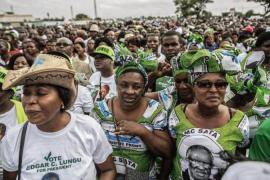