A major Syrian opposition body has announced that rebels have broken a siege of the northern city of Aleppo, while the government has deployed hundreds of reinforcements to the embattled city.

The Syrian Observatory for Human Rights, a UK-based monitoring group, said some 2,000 pro-government fighters from Syria, Iraq, Iran and Lebanese Shia movement Hezbollah had arrived in Aleppo since late Sunday.

“Both sides are amassing their fighters in preparation for the great battle of Aleppo,” said Rami Abdel Rahman, the head of the Observatory.

The Ahrar al-Sham rebel group also posted on Twitter that rebels had seized control of Ramosa on the southwestern edges of the city and thereby “opened the route to Aleppo”.

Syrian government forces encircled Aleppo on July 17 after closing off the last opposition-controlled route into the city.

Al Manar, the television station affiliated with the armed Lebanese group Hezbollah, which is fighting alongside the Syrian government forces, said “the rumours that the seige on the eastern neighbourhoods has been broken is entirely false” in a statement on its website.

Zouhir al-Shimale, a journalist in Aleppo, told Al Jazeera that the siege has “practically been broken”.

A coalition of rebel groups, Jaish al-Fatah (Army of Conquest), announced on Friday it had taken control of a strategic military base in the Ramosa quarter in southwestern Aleppo.

The rebels used the base to launch raids on the government-held area, according to Shimale.

At around 12pm local time on Saturday, a car bomb exploded in al-Amiriya, at the edge of the besieged part of the city, he said.

Shimale said the area between Ramosa and Amiriya is now all under the control of the rebels.

“There are heavy clashes and random shelling from helicopters and warplanes,” he added.

Jabhat Fatah al-Sham, previously al-Nusra Front, said on Saturday that rebels pushing out from inside Aleppo city had linked up with those on the outskirts, according to AFP news agency.

The Syrian Observatory for Human Rights (SOHR), a UK-based monitoring group that records daily developments in the country, said “the rebels have linked up and advanced into the eastern districts of Aleppo” but have not yet secured a safe route due to Russian aerial bombardment and heavy regime shelling on the area.

If cemented, the breakthrough in Aleppo would be a boost for the rebels, who have been fighting for weeks to retake control of the city despite heavy bombardment by Russian and Syrian forces.

The Syrian conflict began as a mostly unarmed uprising against President Bashar al-Assad in March 2011, but it quickly escalated into a full-blown civil war.

The SOHR estimates that more than 280,000 Syrians have been killed throughout the five years of bloodshed. 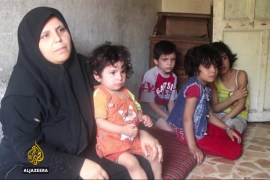 First-person account of one the many families who live with the constant threat of gunfire and barrel bombs.